I didn’t know what I was getting myself into when I decided to ride with some of my pedal RACING teammates.

Not long after we left the Start line, were we hammering it to the halfway point. My goal was to PR the ERock Century Ride, but I wasn’t expecting to go this fast. I PR’d by about 30 minutes. I also had two QOMs – one of which beat a Primal Audi racer by a mere five seconds. And I didn’t even realize we were hauling that much ass.

Then I ran over a giant fucking nail. Nothing fucks up a ride more than a mechanical. The volunteer who helped us didn’t even know how to use the tire pump he let us borrow. Neither did Jim – an engineer. Even with the mechanical, we still beat my time from last year. 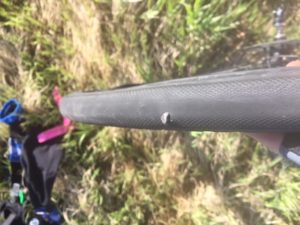 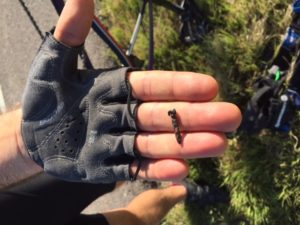 We all agreed that we’d have a Negative Split ride because we all felt the giant pulls we had done earlier; along with tired legs.

I remember one point I was the only woman on this pace line and as pulled off, the men kept coming and coming. I pulled about 9 men. My legs were toast.

I used to ride ERock with my buddy Jared, but he was training for an Iron Man and I had a free entry and teammates to join.

Riding with a group is a lot more fun than riding solo, which is why I joined a team. I remember training for the Colfax Half Marathon and it sucked even harder because I ran alone. 13 miles of slogging my way downtown with no one to talk to and listen to the voice in my head.

At least with ERock, the guys I rode with were entertaining and kept me pushing myself. It’s easy to give up and slack off when you’re alone. When you have a group of people, you can push each other.

My advice: find a team or group to ride with and ride with them as often as you can. You’ll become a better cyclist all around: faster, stronger, tougher, and maybe funnier. 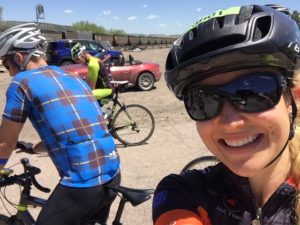