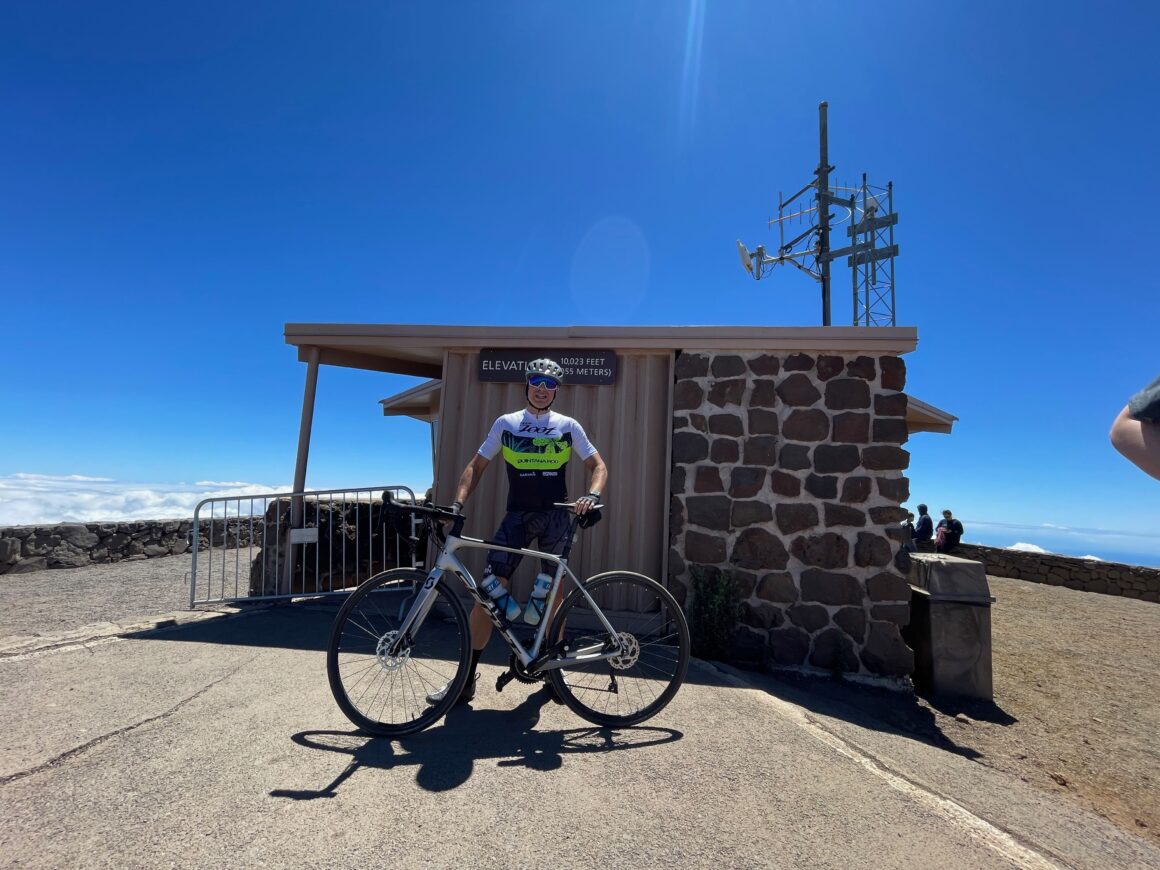 We were off to Maui, and there was one thing I was determined to do. Climb Haleakala!

Somewhere I had seen that you could ride from sea level to 10,000 feet and I was in awe of this. I wanted to do this! It was crazy, but it appealed to me and I was sure to do it.

Ironically I never really thought about how had it would be to climb a volcano. I knew the elevation profile, and I had done that kind of climbing before, but I didn’t even know the route or the distance. So I started doing some research on Stava and checking out the course.

I found a bike shop at the base of the volcano and I rented a bike. It was the perfect location! It was Maui Sun Riders Bike Company, and they were super helpful. I had called them to figure out some logistics before we flew out and the owner took several minutes to talk to me about the trek up Haleakala.

We were staying in Kihei, which was on the other side of the Island from the road up Haleakala, so I had thought about riding from the condo up, there was a decent path and it wasn’t all that far, but I convinced Lauren to wake up early and drop me off instead. When I went to pick up the bike the day before, it was expressed to me that this was no easy bike ride and that I would need to be prepared and bring enough water and give myself enough time. So the decision to start at the base made sense.

We started early about 6am. I had the route loaded in my GPS and I had 3 bottles of water and fuel to take me to the top. As I started the ride I was excited, but also nervous and I didn’t know what to expect. It’s a long journey to the top and the road was narrow and windy. The climb never lets up, after all it is a huge volcano.

The plan was for Lauren and Jacob to meet me at the top just as I arrived there. That way they could enjoy their morning in Maui and then drive up just before lunch.

The first part of the climb was up through Paia. This is an old surfing town in Maui. Where the bike shop is located. As I made my way up the views started forming. Not even 500 feet up and it was already a magical experience.

The first major milestone of the ride was reaching Makawao. This is a cool mountain village with a few shops lined along the roads. Not something I would have expected. Next up was the Kula Lodge. This was supposed to be the first stop that I could get water if needed. I was still good. The cooler temperature in the morning helped.

Here you turn into what looks like a upscale neighborhood. But it starts a series of switchback up to Haleakala. Around this area was lush like a forest. That was the most interesting thing about the ride up, the scenery changes constantly. It made the ride exciting and beautiful.

The long switch backs that came next reminded me of the Swiss Alps. Not that I have ever been to the Swiss Alps, but I guess that’s what I pictured. And here you could see all of Maui. It was breathtaking.

Along this section I started to see all of the bikers that were biking down. They truck you up and then you can ride down for fun. I would get to ride down too, but I was sure going to put in the work first.

I also started to pass a few guys where were riding up. I felt that I was going at a good pace.

There were so many moments that were special as I neared the top. Entering the clouds and seeing a wild boar dead on the side of the road. There were images that you couldn’t see anywhere else.

Finally I made it to the Haleakala park entrance. You have to pay to get in, even if it’s on a bike. I talked to the lady and paid for myself and Lauren who would be coming up later. I actually thought maybe we could pay just once but they charged me twice anyway.

Just inside the part there was a bathroom, so I took a quick stop and then started my journey to the top. The rode here was a little steeper and the switchbacks got shorter. The temperature was much cooler, and the terrain was arid like a desert.

As I neared the top I came across a large parking lot. Could it be? Was I there? Nope, that was the visitor center. I could set more climbing ahead of me. I had to go around a bend, and then there was a big climb up to another parking lot. There it was the end of the road. But that wasn’t it. To reach the summit there was a path to the tip top.

I didn’t feel as though it was appropriate to ride my bike to this point so I got off and walked my bike up to the top. I made it. I climbed a fucking volcano and I was on top of the world. 10,000 feet of climbing. Just then I saw Lauren and Jacob drive up. What perfect timing. We go to share the moment together.

At the top many people approached me and asked if I rode my bike all the way up. People couldn’t understand that you would do such a thing.

I was looking forward to the ride down, but I knew it would be cold. I put on they layers I had and started down. I was flying and keeping up with the car traffic. I planed to meet Lauren in Makawao where we would get a cookie for The Maui Cookie Lady. Again perfect timing. I was going just as fast as the cars so we made it there at the same time.

After I loaded up on the cookies I headed back to the bike shop to drop the bike and Lauren would pick me up. We enjoyed a great lunch at the Paia Fish Market to celebrate the accomplishment. What a day, what journey. I’m so happy I was able to experience this.

'Haleakala! I Climbed a F’ing Volcano' have 4 comments