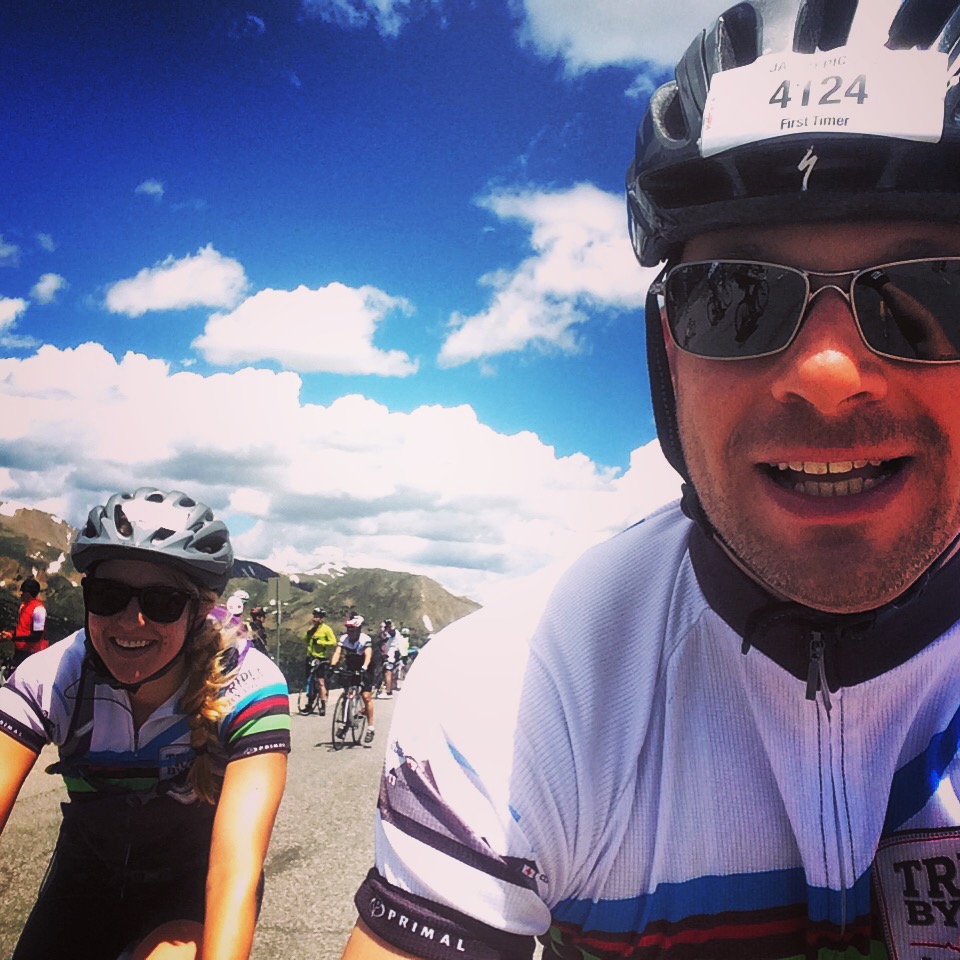 There a some days you’ll never forget and The Triple Bypass 2015 is definitely one of them. This was my second triple, so I had a good idea what to expect. It is a challenging ride, a long one and because you are climbing mountain passes, the weather can be a little unpredictable. Despite the fact that this right was tough, I had so much fun and am ready to do it again next year. And I’m pretty sure it’s going to be the Double Triple.

The plan was to roll at about 5:30am. I picked Jessica up at about 4:45 and we made our way toward the start in Evergreen. I had forgotten to get gas the day before so I had to stop in Morrison to fill up. As we got to Evergreen Jessica realized she forgot her sun glasses. It would have been miserable to spend a day outside without them, so we stopped at King Soopers to get some. After that we were directed towards parking at Evergreen Middle School. 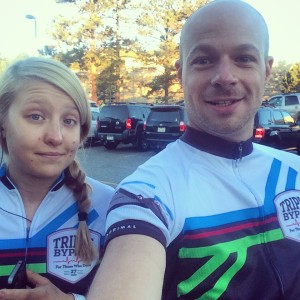 We were slightly delayed, but were ready to start. We got our bike out of the car and Jessica realized she forgot her bag with a change of clothes and the ever important chamois cream. We discussed what we should do and Jessica ended up calling her mother, who drove all the way to us to bing the bag. Lynn gets some major mom points for that one! Chamois cream was applied and we were ready to ride.

We stared a little over an hour from when we thought we’d get going, but it was all good, there was no rush. It was cool, cooler than I expected only about 47° at the start. We got to the top of Juniper Pass and hit the aid station. It has seemed to fly by. It was really crowded though, way to many people for my taste. It was a long line just to use the bathroom.

The descent from Juniper into Idaho Spring was fun. The road was freshly paved, and the corners were not all that tight. We flew! Descending is probably the best part of mountain rides, you work your ass off to get to the top, they you have this great reward.

From Idaho Spring to the Base of Loveland is work. We’ve covered this area many times, so there were no surprises, but the climb is still intense. We stopped at the aid station and waited in a ridiculously long line to get lunch. I got a turkey wrap that was pretty good, and poor Jessica got a gluten free vegan wrap that was about the size of a finger. She ate it in two bites. After that we waited in line forever to use the port potty so we could reapply chamois cream. A very good move on our parts.

We climbed Loveland pass rather quickly. I think we set a new PR for ourselves. And the descent into Keystone was fun, as are all the descents! Then we came up on Swan Mountain. This is a little bitch between Keystone and Breckenridge. We made it thorough and stopped at the aid station in Breckenridge. Grabbed some trail mix, Jessica had watermelon, then we were on our way to climb the last pass. 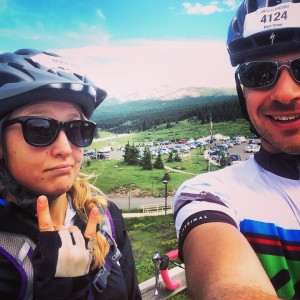 We had done the ride from Breckenridge to Copper Mountain the weekend before, so we knew what to expect. The ride went well, but it was very crowded on the the path, and there were also lots of people and families just riding for fun.

We got to Copper and were ready to get Vail Pass taken care of. As we were riding up Jessica and I were chatting about Orange is the New Black. I wasn’t paying attention to where I was going. My front tire overlapped with her rear tire. This wasn’t a good situation. Not sure what to do, I called out her name as our tires hit. I could have taken us both out but luckily she recovered. I went flying off the path, but was able to stay on the bike. My chain came off, but that was easy to fix.

Vail Pass, was pretty short. We got to the top and took a break at the aid station. It looked like rain. In fact a guy told me it was raining the entire way into Vail. Now even though rain gear is required, I decided not to bring my rain jacket because it said 0% of rain. When will I learn not to listen to the forecast! 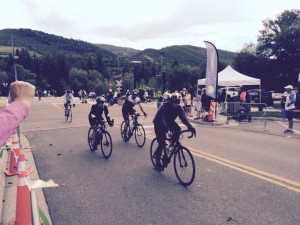 It was 28 miles downhill from Vail Pass to Avon. It did rain, but not a lot. It was mostly wet, I guess we missed the majority of the rain. It was cold! And because of all the moisture we couldn’t go as fast and we wanted. It was also hard to ride because the splash back from the rear wheels. If you could see a rider in front of you you were going to get hit in the face. Never the less we cruised into Avon

At the finish my parents where waiting and my Dad was able to snap a finish line photo. Greg surprised Jessica too. Colorado Native was giving away free beer, which was awesome. Needless to say we partook in several of those. We also got to meet up with our new cycling buddy Neil.

It was an amazing day one that I’ll never forget. Such a challenge, it just feels amazing to be able to complete it. Also got to do it with my best friend. We work hard getting ready for events like this, and it feel so good to be able to prove that all the time we spend training pays off in the end. Having the support of friends and family at the finish is so great. Even though I was tired, and my ass was sore, I think I had a smile that stretched a mile.

'Triple Bypass 2015' have no comments