I’ve ridden the Santa Fe Century before, but I’ve never signed up for the Grand Fondo timed event. In an effort to get ready for IRONMAN Boulder I figured it would be a good challenge. It turned out to be much more of a challenge than I anticipated.

The course changed from previous years, and looking at the new course I assumed it would be much easier. After all the hardest element, Heartbreak Hill, had been removed. The was a two loop section at the beginning that covers the first 50 miles then a larger loop that covers the last 50. The end of the course was much the same.

Lauren and I drove out to Santa Fe on Saturday, the day before the race. I needed to get checked in by 7pm and we arrived at 6 which was just perfect. It was easy, I got my numbers and we went and had dinner. 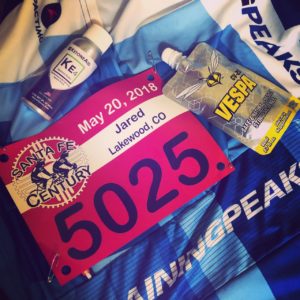 I woke up early the next morning to prepare myself for the ride. I was trying a new element in my fueling strategy, ketone esters! The rest of my nutrition plan stayed much the same.

I got to the start, parked and got ready. It was cool outside and I debated wearing arm warmers, but decided not to.

The start of this race is escorted by police motorcycles for the first five miles or so. This makes for a very peloton feeling as everyone is grouped together. The first several miles felt good too. We were traveling along 20MPH or faster and I was settling in for a good race.

I was having on to the lead pack for quite a while, when I finally got dropped I was in the chase pack. And then the wind kicked up. Suddenly I couldn’t keep up anymore. We had some rollers and it became a struggle. I could still see the leaders up in the front though, but then we came around a corner and the wind got really intense.

The first 50 miles, the wind was a major factor and my time started slipping dramatically.

As a triathlete I’m inclined not to draft, but in situation like this, drafting is ideal. There were a few groups I tried to ride with, but at times they were to slow and at other I got dropped. It was frustrating trying to go at a pace I was not comfortable at. So I just did my own thing.

As I started the second loop, I was caught in a sea of traffic from the 50 mile riders. I passing the with ease even with the crazy wind.  Eventually I came up of the turn off and found myself alone. A few minutes in a guy came up behind me and asked me what loop I was on. He was a little confused about the course and I assured him we were on track as I programed the map into my Garmin.

We chatted for a while and turns out that he does triathlons too. We rode together for the next 30 miles or so. It was nice to have company, but at the same time I think I help back little. He had said he lost the group he was with when we hit the traffic from the 50 mile riders. Not long after that same group came up behind us. We rode with them for a while, but then the group started breaking up. I found myself behind slower riders and the faster 3 were getting further and further ahead. I said fuck it and went with the faster riders.

I didn’t ride with them for long, there pace was all over the place and I couldn’t that the inconsistency. Luckily we turned a corner and we got a tail wind!

I gave it my all and just went for it. This far into the race I knew that I missed my goal time, but was going to continue to ride. It was a struggle and my legs were screaming.

Most of the last section of the course was uphill. But with the tail wind it didn’t seem so bad. One of the guys in the group of 3 that I was riding with had passed me again and was long gone, there was not way I could keep up. 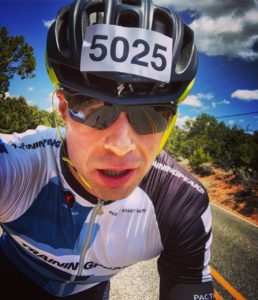 The Grand Fondo timing finish was about 90 miles into the course, we would take a turn cross the timing mat, then continue to the Century finish. That last part of the race was a struggle, it hurt. But I crossed that mat and felt relief of finishing! 5 hour and 15 minutes, not the time I wanted, but I was done. Well I still had 10 miles to go, but it was mostly downhill. That last 10 mile felt great until we changed directions and had to deal with the wind again. 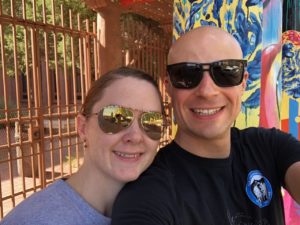 Once I crossed that finish line I had never been so happy to be done! It was a really hard race. I had no idea where I finished and at that moment didn’t care. I packed up to go spend the rest of the day with Lauren and enjoy Santa Fe.

At lunch we looked up my times and placement. It was a big letdown. Not only did I come in 12th out of 15 in my age group, but the first place guy did the course in 4 hours!!! I just didn’t understand how that was even possible. Looking at the numbers I really worked it, but the time did not show it.

I’m glad I did this race, It was hard and only made me stronger as a cyclist. I also learned I have more work to do on the bike. But I know I gave it my all and I’m happy with that result. Now onto the main event, IRONMAN Boulder.