Ride the Rockies Day 7 Canon City to Westcliffe was a bitch of a ride. I was tired and it was hard. After not getting much sleep I woke up a little later than usual. When I got out of the tent to get coffee, I realized most people had packed up already. Then sun wasn’t even up yet. I figured I was in no rush. Unfortunately there was no coffee to be had. Three different vendors were out! So I had to forgo the coffee and start on empty.

I packed up fairly quickly, and it was dry in Canon City so I got to pack a dry tent. This made me very happy as I didn’t want it all wet in the bag. I actually got on the road a little before I expected, and started my way to Westcliffe.

The start of the journey was actually rather nice, it was a slight decent which made it easy. The roads had no shoulder, but it was early and traffic wasn’t all that bad. You could tell it was going to be a really hot day.

As we road along, I saw a roadside sign about Hardscrabble Pass. It looked like it was so far in the distance and we were going to climb over hit. I knew then it was going to be a hard one.

Hardscrabble Pass was a bitch.There is no better way to put it. It was long, steep, hot and it just kept going. I was tired and I’m sure this did not help at all, but it felt like one of the harder climbs we did. The Grand Mesa was up there, but there was just something about Hardscrabble. There were so many times along the way I thought that we were to the top. But finally it did come and with a amazing view of the mountains. 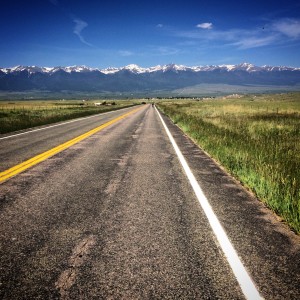 The decent into Westcliffe was fun and a well needed break from the climbing. The road lead strait into town, where we were greeted by tons of locals. The sides of the streets were packed and everyone was cheering and ringing bells. It was quite a spectacle. Mom and Dad were coming to pick me up, and I wasn’t sure if they were going to beat me or not. There was so many people out I thought I would never see them. But there they were! They had just gotten there talk about perfect timing.

I have to hand it to Westcliffe, they really put together quite an evert for the finish. There was all sorts of great food, and the view was amazing. What a cool little town.

This years ride was amazing. I had a great time, made some new friends, and completed some pretty epic rides. Knowing I got to ride next to Lance was pretty gratifying too. I’m happy to be home, and not have to pack up the tent every morning, but I’m not going to stop riding. It’s my passion, and I’ll be on my bike every chance I get.