Today was one of those days that remind me why I love cycling so much. Ride the Rockies Day 5 Crested Butte to Salida was not without it’s hardships, but it was an amazing ride.

I fell asleep very easily which was good, but I woke at about 2am and heard nothing but snoring from all the surrounding tents. I wasn’t able to really fall back asleep. Finally I decided to get moving about 4:50am and realized it was freezing. Frost had covered my tent! I wasn’t expecting to have to dress warm for this ride, but I would have to.

I hit the road a little bit latter than I wanted to about 7am. I figured there was really no rush other than to get a good camping spot in Salida. It was freezing and I could barley feel my hands. The good part was the ride started down hill and I was cruising. I was going so fast that I skipped the first aid station because if felt like I barley even started yet. 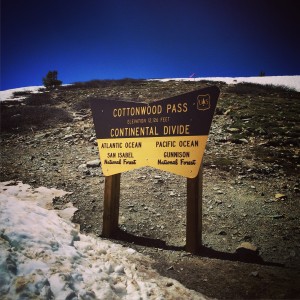 There was actually not much climbing for most of the ride which was nice. The sights were amazing at it was great to see new parts of Colorado.

After a couple of hours, I hit the dreaded Cottonwood Pass. I was not looking forward to this because it was like 13 miles of dirt road to get to the top. I’m not a fan of riding on dirt on a road bike. But it wasn’t that bad, and the grade wasn’t very steep. I actually wasn’t even in my little ring until I got close to the top.

There were a few spots of the road that were a little sketchy, with sand and rocks, but I made it through and was happy to hit the top.  What a view! 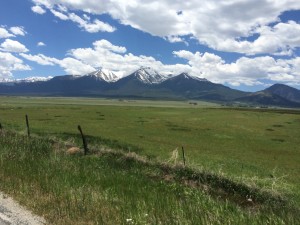 The decent was the best, only a few switch backs and I was flying hitting a top speed of 47mph. It was fun! Once we got down we went through Buena Vista, but kind of on the back side. I love to camp there so I was cool to ride though. There was about 12-15 miles between there and Salida. There was no one around me and I loved it.

We had to get on to 285 for a stretch, but it was downhill and I was flying. I pushed it hard. I wanted to break six hours for this ride. I came so close too!  6:06:32, not too bad for 103 miles and crossing the continental divide.

I will admit I was a little intimidated by the distance of this ride and the dirt climb. All turned out well and it was probably one of my favorite rides this time around. Still two days left though!