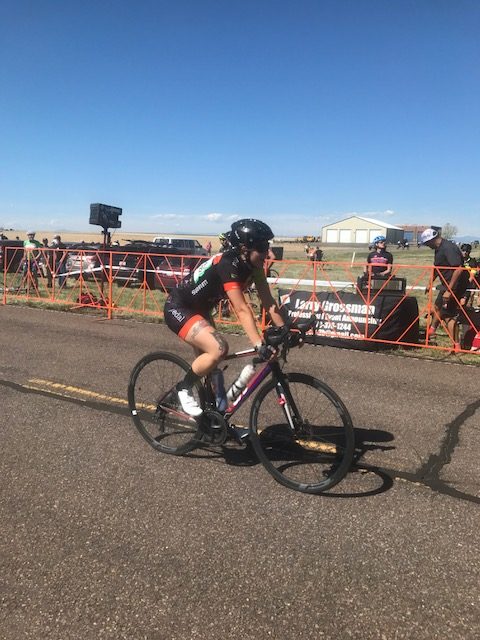 I met with Rene Macias, race director for the Bill Davis Road Race (formerly known as the Rio Grande Road Race) to gain insight into putting on a road race in Colorado.
After giving him grief for what I considered disadvantages for women’s racing, he invited me to chat in person about my concerns. He could have easily brushed me off and never responded to my email, which would be the easiest option for someone. It says a lot about Rene taking the time to not just to email me back, but to also suggest meeting in person to talk about my issues.
I sent him the following:

I hope this message finds you well. My name is Jessica and I’m a Cat 3 racer. I was looking at the registration flyer for the Bill Davis Road Cup Race and noticed that the Cat 3 women only receive merchandise whereas the Cat 3 men receive a cash payout for the top 5 riders. Same goes for Women 40+. At the same time, the Cat 3/40+ women pay the same registration fees and have less race mileage.
I’m wondering if you’ll discount the registration fee by 25% because the Cat 3/40+ women are racing 25% less terrain and don’t receive any cash payout for their placing.
I look forward to hearing from you. Have a great day!

**********
Yes, I sent him a similar email last year. So I agreed to coffee. I put my money where my mouth was and agreed to meet Rene in Denver. I walked away from our meeting with a new level of respect for race directors. I now want to do what I can to help race directors like Rene, encourage equality in racing, and grow women’s racing.
Like most amateur athletes, race directors have full-time jobs they juggle alongside putting on a race.  Rene is no exception. He has a full-time job and two daughters. I learned he has to front a lot of costs to put on the Bill Davis race and barely breaks even every year. That’s due to all the permits he pays for to use the roads, the cops, and emergency personnel, and other various admin fees, like USAC and officials, to put on the race.
Not to mention the fact that Rene went door-to-door to the citizens of the county to get their buy-in before he put on the Rio Grande/Bill Davis Road Race. He explained the benefits of the race for the neighbors, essentially creating a marketing plan not only for sponsorships but for the locals.
Like most races, there just aren’t enough women participating to encourage race directors to pay out equally among all categories.
We like to think of race directors as short-sighted, but after learning that Rene has been directing races for thirty years, it was hard to argue that he “doesn’t get it.” Economically, it makes sense to pay out the categories that bring in the most revenue. But it begs the question, “will paying more in smaller fields draw more participants or do we need the participation first to encourage equal payouts?” It feels like one of those shit-uations where you’re damned if you do and damned if you don’t.
We both agreed that it made more sense to payout by percentage of participation, which means more participants, higher payouts. It encourages more women to race without detracting from the current high participation fields, namely the men’s fields.
We spoke further about women’s participation in road bike races in general. We also talked about Venus de Miles and its success in drawing hundreds of women to its annual organized bike ride. It’s one of those never-ending questions that still doesn’t have an answer. When I asked the women in the Facebook group, Women Bike Colorado, the biggest reason was that racing would take the fun out of cycling.
No one’s saying you can’t have fun riding your bike fast. No one is expecting anyone to win. We’re all out here participating for a number of reasons, one of which is to have fun. Others race because they like the competition. People like me find it fun to compete.
If you ride a bike and don’t race, how come? Why do you think there aren’t there more women racing?

'Race Directors are People too' has no comments