This past weekend, fellow cyclist, Jared, and I rode up Squaw pass in an effort to get my gears and rear in line before the Triple Bypass July 11. We rode from Littleton through Morrison through Evergreen up to Squaw Mountain and never-have-I-ever experienced so many awesome smells.  There was an array of scents: pine, greenery, flowers, bbq, smoke, rain, fresh, clean, cologne..

It was a bit of a climb, to say the least, but then again, it wasn’t as hard as I was expecting. I was sure I’d be walking it up in parts based off what others have told me about Squaw Pass. I didn’t. I didn’t even come close to having to. Now, don’t get me wrong: this was no bike through the park (or was it?), but people have gone through great lengths to describe to me the amount of effort it takes to climb Squaw Pass. I was told this was the hardest of the climbs in the Triple Bypass. It felt like a combination of Deer Creek Canyon in Littleton and Lookout Mountain in Golden, both of which I ride regularly. 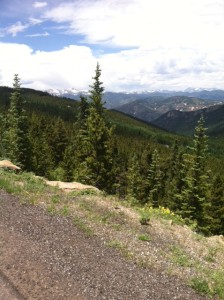 And when I almost reached a point of total exertion and raw arse, I’d look over the shoulder and boom, beautiful view & fresh air. Nothing beats Colorado. Where else can I go from my house in Littleton to the top of a pass and back in five hours with scenery and smell of pine likes this? To top it all off, we somehow managed to avoid a torrential downpour, but were able to enjoy the smell of freshly poured rain. 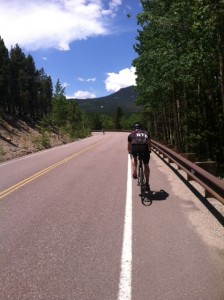 The only thing that bummed me out about my ride was my new bike, Thunder. It has been squealing when I hit inclines. The bike works just fine, but I don’t need to hear it working. It’s like having an annoying co-worker: you expect them to do their job, but when they do it, they have to boast about it. It’s like, yeah, Thunder, I get your gears are working hard, but you don’t have to remind me with every wheel rotation. Also, the brakes. Holy smokes. They’re loud. When I was getting fitted for the bike, I was told there was something on my brake pads that needed to be sanded off. The guy didn’t have the time to do it then and instructed I come back another time. I was afraid I’d have braking problems, but he assured me it would just be loud. And it is. Again, the boastful co-worker. 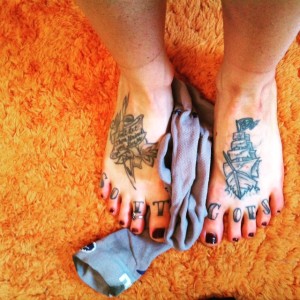 I got a bit dirty through our ride, but that’s how I know I did it good. My suggestion for folks going up Squaw Pass: Lots and lots of chamois cream, mentally prepare for no relief the entire ride up, and make sure you have your gears and bike in line so you don’t have to hear how hard it’s working. We’re all working hard. No need to brag.

'Squaw Pass: Our Smelliest Ride' have no comments