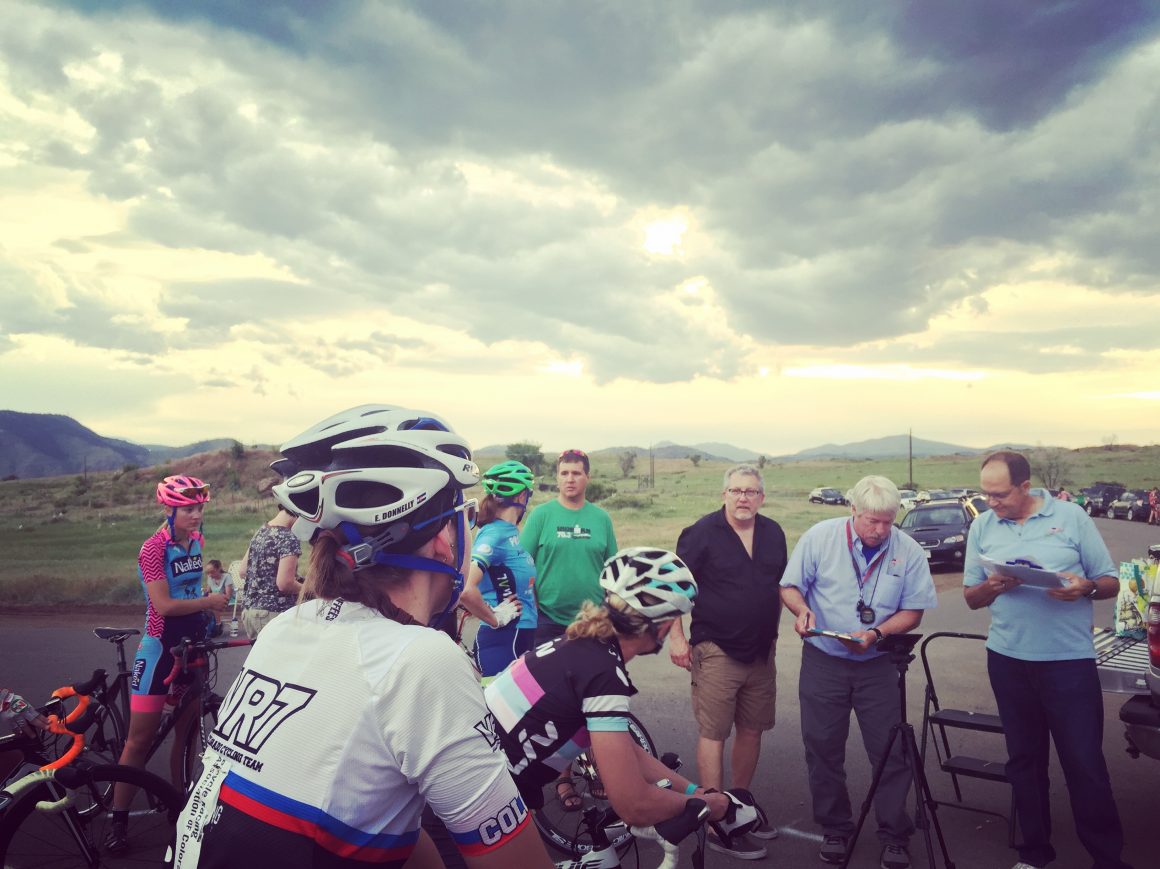 I tried to ignore the burn running through my thighs as I pushed and pulled each pedal up a false flat during the women’s training race put on by Jon Heidemann at Peak to Peak. This was only a training race, but I could feel the competition like the lactic acid in my legs.

Jon and a man I recognized from the Karen Hornbostel Time Trials Series stood in front of us briefing us of the race setup. We were to race eight (or was it nine) laps, with lap three and six as sprints. The man said he’ll ring the bell on the sprint laps. I turned to Eryn, “I have no idea what we’re doing.” She smiled at me. She knew what she was doing.

Jon reminded us a little of what he taught us just minutes before we lined up at the white, spray-painted line. “Jesus,” I thought, “I just hope I can keep up.”

The whistle blew and it was a gradual start. Having practiced riding shoulder-to-shoulder with the women, I felt only a smidgen more comfortable. I’m realizing I trust myself about as much as I trust strangers. During the clinic prior to the race, Jon mentioned to watch out for the ones who don’t ride as smoothly around corners, kind of like, twitching around them instead of a gradual turn. I remember being that twitchy turner as Eryn and I turned the cones.

Overwhelming thoughts of self-doubt and defeatism spun through my mind as ladies rode past me. “I’m just gonna slow down a little at this – ohmygodimgoingtofall – turn.” Watching the road, my handlebars, the other females (and two boys) flock around me as we all swooped through the first turn made me feel about as unsteady as balancing a wheel on a ledge.

“Okay, I got this. Pedal faster.” I caught up with the pack. During the clinic, Jon gave us the layout of the course. I already forgot the term he used because I never heard it before, but the road is like an “S” shape. I learned by the second lap I could overtake the majority of the group by hanging on the outside of the first big turn then staying on the inside of the first curve of this “S” portion. I gained the ground I lost in the first turn.

Women were shoulder-to-shoulder, wheel-on-wheel as sprinted through the 3rd lap. Jon and his Assistant Coach were riding with us, pointing out what each of us could do better through the race. I could hear his assistant giving the two boys tips to get to the front. I tried taking the outside of the group, pushing as hard as I could. My legs were on fire and I still wasn’t getting far. Then one of the boys flew past us as if it were nothing. I felt like Seth Rogen in Superbad:

We still had five laps to go. On the 6th lap, the man rang the bell again, but this time the sprint wasn’t really a sprint. Sure, a few ladies took the lead, but we all just hung out together, slowly filtering and positioning back and forth. We must have all been tuckered out at this point because no one sprinted to the front of the back on this second sprint lap. Maybe our heads were getting to us. Maybe our bodies.

It was both for me. The whole time throughout the race I doubted myself. I thought, “surely, this isn’t for me. I’m not strong enough. I’m not fast enough. Maybe I just stick with organized rides because I know I can at least do that.” I tried to focus solely on the road and the women within shoulder’s reach of me, watching to make sure no one hit me or slid out or knocked into me.

We were at the last lap and the men on the sidelines yelled, “LAST ROUND. PUSH IT. PUSH IT.” I kept up with the pack fine, even made it toward the front for a little, but that competitive spirit hit us all at the last bit of false flat. Legs on fire, lungs wheezing and burning, sweat dripping off my chin, sunglasses sliding down my nose, I tried to give it my all, but my legs were toast. They were jelly. One was toast and one was jelly. I wanted to get up front, but I didn’t have it in me.

As I crossed the spray-painted finish line, the air escaping my mouth whistled. I’m realizing now that I may have to use the ol’ inhaler prior to these races if I want to breathe. We all took a slow cool down lap (didn’t know it was a thing, but everyone else was doing it), trying to gather ourselves, at least I was. Jon’s assistant coach came up to Eryn and I. He commented on me crushing the front in a couple of the laps. He also said that I needed to get more comfortable in the groups, positioning myself, and having control of me and my bike. For the $23 I spent on the clinic and race, I feel like I underpaid. Jon and his assistant guy gave us invaluable tips through the clinic and then we got to use what we learned in a controlled racing environment with other newbies.

What bums me out the most is that this is so useful for women yet only 14 women showed up yesterday compared to the 60 men that showed up the night before. I think a lot of women just aren’t naturally competitive. Last night was so far out of my comfort zone, yet I thrive off it. I grew up in a competitive family. I was never coddled. I was never treated like some breakable, fragile little girl. When I bled, I was told to stop crying and put a band-aid on it. I remember so many times through my childhood when I hurt myself and my parents always told me to get back up. I think in our society, the traditional role of a woman is to be tender and fragile, to work together, not to compete, all that hubbabaloo. Because of this, I think women tend toward group rides, easy rides, rides that encourage them instead of make us feel less-than because we’re not the fastest, the toughest, the strongest.

It’s one of those things in society where we tend to have a defeatist attitude: if you’re not the best, then you’re the worst. We’ve been taught that trying isn’t good enough. If you’re not first, you’re last. I know. I come from that way of thinking. I remember getting B’s in school and my parents wondering why it wasn’t an A. I hate that I came in 10th place last night. Like, why wasn’t I first. I remember thinking that if I fell right now, I could break my neck. I think that’s the difference between men and women as well. Men think they’re invincible. Women realize that our bodies are destructible. We also realize the repercussions of breaking something: it affects our lifestyle, our family, our jobs, our lives. That’s where women veer toward the safer activities: sticking around 12 mph on a flat, wide open trail.

We think more about others than ourselves. But I want us to encourage communicative competition. There’s no reason for us to hurt each other to get first. There’s no reason to bump and crash if we’re communicating. With clinics and training races that Peak to Peak  offer, more women can learn to safely race with the confidence that I see myself and others lacking.

'Feeling the Burn With P2P Training Race' have no comments