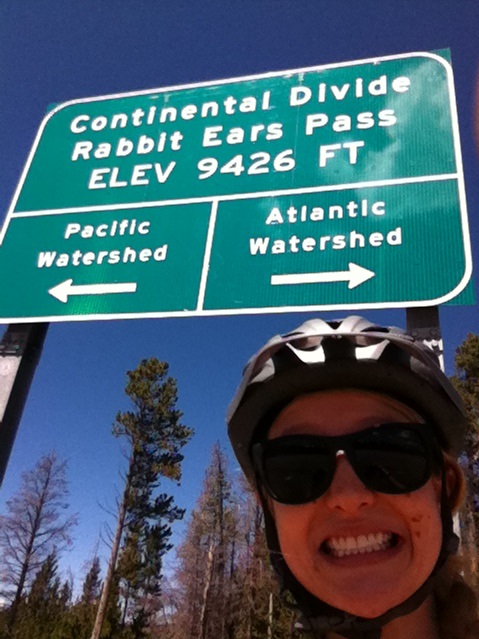 We’re driving back to Denver from Steamboat and my knees are not happy with me one bit. I think it’s time I look into adjusting my bike. This past weekend was a mix of countryside and mountain. Saturday we biked up Rabbit Ears Pass and Sunday was loose gravel and cow-crossing. 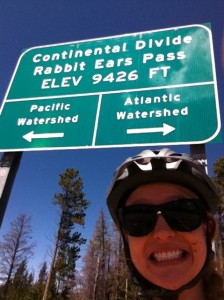 The way Jared talked about Rabbit Ears I had been mentally preparing myself for this ride since we decided a date. I don’t know if it was the mental preparation that helped me own that pass or being physically prepared, or both. Probably both. When we were driving into town, I didn’t see much of a shoulder and I was pretty nervous: “You mean, we’re going to go up and down a pass without a shoulder?” “You’re telling me we’re at the mercy of the cars?” I had a few other choice words to say to Jared (my biking partner), but the closer we got to the ‘Boat, the more pronounced the shoulder. I have this fear of punching it down the mountain or pass and hitting a rock and sliding into the car lane and being run over by a semi (I have a dark mind).

The morning was fairly icy compared to the rest of our summer mornings, but I quickly warmed up once we started ascending the mountain. We made it to the top of Rabbit Ears in a matter of a couple hours and because that was challenging enough, we kept going. I almost felt like Forrest Gump, but then again, not really: that was a film and I’m just a human with limits, as my knees remind me. While it certainly wasn’t your Sunday stroll, being able to look to my side and see an endless valley was worth the pain. Beauty if pain, right?

We had quite the late start Sunday morning. We found out we had to check out of the condo by noon, which we’d definitely miss while on the bike. Luckily, the family was able to check us out while Jared and I went on our 54 mile bike ride. Now this one, I was not mentally prepared for. Jared kept telling me how much I was going to like this ride; it was beautiful, blah, blah, blah. I was very irritated at the end of this one.

To start, my contact was agitating my left eye: it felt like there was a pebble under my eyelid. My grandma knees were kind of bugging me too. Ya know, just your usual annoyances. Apparently, there was a triathlon and some of the volunteers thought we were stragglers. I made sure to set them straight.

Jared and I saw these two women on the side of the road, bike upside down, wheel between the legs: they had a flat. Jared was leading and he asked if they had everything they needed. They didn’t. We pulled over and helped.  Which reminds me: I think the bike community is usually willing to help. Any time I had a flat someone passing always asked if we were okay. It’s a good feeling. 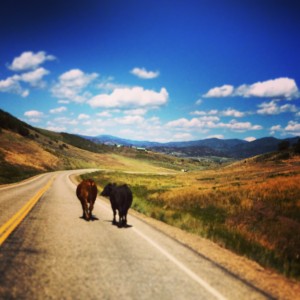 We were finally on our way again. We were following one of Ride The Rockies routes because I couldn’t afford to do it and Jared’s obsessed with the ride and wanted me to have a taste. There were a lot of climbs on the ride, which again, I wasn’t prepared for. It’d be hill after hill. There were some pretty nice downhills and I was tempted to just fly, but again, didn’t want to hit a rock and tumble and a speeding car crush me. I got it up to 34 mph. Very short-lived until we reached yet another climb. I don’t know if my body was tired from the ride the day before or if it was the drinking, but this was a rough ride. Then we reached about our halfway point: I wanted to rip out my eye, but instead, I took out of my contact, so I rode the rest of the way half-blind. No big deal or anything. There was also a sign: Loose Gravel. I definitely wasn’t excited to see that. It was about nine miles of this – so we couldn’t go fast on the downhills and climbing up mountains and hills were bull.

Speaking of bull, we saw plenty of cows and cow crossings. Jared scared a couple of cows trying to take their picture. I also had to pee. I found some bushes at the end of a driveway and squatted behind the grass. Honestly, I was afraid something was going to bite my rear, but I relieved myself unscathed.

Because we had to check out earlier than we planned, we couldn’t take a shower, so we used some “Action Wipes” to wipe our sweaty bits off. I had to change into normal clothes in the bathroom stall to avoid sitting in my sweaty chamois all the way back home. Luckily, we had the windows down the whole way back, so we didn’t stink each other out.

So what did I learn after the weekend of riding The ‘Boat? You need to mentally and physically prepare for rides (and limit the drinking the night before).

'Cycling the ‘Boat' have no comments