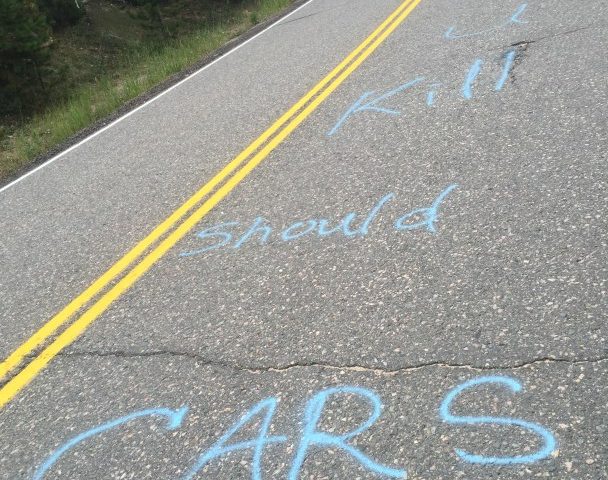 At the Red Rocks Gran Fondo last Saturday, I realized what’s on the inside of you will come out, eventually. Whether that be sadness, happiness, anger, or fear, we all have things in our lives that inevitably makes us who we are.

Some people have poison within them. Let’s be honest, we probably all have a little. This is a term I learned from Don Miguel Ruiz in “The Four Agreements.” It’s that negativity, hatred, and unhealthy thoughts that cloud your mind. The problem with this poison is that people don’t want it inside them and they think the only way to rid themselves of the poison is to pass it on to others.

The poison that came out of you last Saturday was hatred and it was spray-painted throughout our route.

There are a lot of problems with this message, most notably the misspelling of “you.” That actually bothers me more than the message itself. If you seriously took the time to go to Michaels, to pick your favorite color out of the hundred of spray paint colors (and theirs must be blue), to drive out to this isolated road, in the middle of the night (because cowards don’t do these things in public – for fear of getting caught), hunt down the positive messages the volunteers already spray painted, to have your buddies hold the flashlight over your head so you could see the road as you spray painted, as you laughed and thought you were just the cleverest son of bitch this world has yet to know, and to go find the next positive message to do it all over again – surely, if you spent all this time and your parents’ money to spread your poison, you’d spell “you” right?

Maybe it’s one of those words for you: “Is it u-before-o or o-before-u?” It’s three letters. If you could go out of your way to spread your poison, commit to proper spelling. This isn’t a text message, you’re not restricted to a 140-character limit. You had the entire road and you chose to spray paint, “u.” By this measure, cars should kill “u.” The letter “u” didn’t do anything wrong. It’s just hangs out between “t” and “v.” They’re a happy group of characters. You, you’re not happy.

If I can look past “u” and see the message, you, the degenerate, was conveying, then it is clear that you want cyclists to die, specifically by cars.

If you did your research then you would see a study published by  NHTSA that in 2014 726 bicyclists did die and 50,000 bicyclists were injured. If you did the math, which I’m also questioning your math skills, that’s roughly two cyclists that get killed and 142 that are injured every day.

I want you to imagine 144 people in a row and I know it’s probably hard for you to count that high, let alone envision 144 people who have a mom, a dad, a brother, a sister, a kid or two, a home, a job, some friends; probably dreams and goals for their future. Do you have that in your thick skull? Do you see them smiling? Do they look happy? What are they wearing? Are they saying anything?

Now I want you to take a truck. Imagine the color, my guess is you’d choose blue. Is it diesel? Does it have a hemi? Does it have 4 tires? 6? What song is playing over the stereo? Imagine it all.

Visualize the 144 people alongside the road and take your blue truck with the music playing in the background and hit every. single. one. of. them. One by one, with your mirror, the front bumper, maybe run over a leg or two. I’m sure you pictured them on their bikes, so make sure you envision destroying their bikes as well. 142 people survived. Blood’s running down their knees, out their noses; squished raspberries clotting around their knees.

2 never stood back up. 2 bodies lay on the pavement motionless while the other 142 people groan and cry. 2 human beings that are no longer considered people, but a ‘body.’ They’ve lost their identity and their life. That’s what you want.

That’s what your misspelled message represents.

You are a sad person. Let go of the poison within you. The human beings, myself included, that rode our bikes on Saturday did nothing to you. I’ve never wished harm upon you or your family. I’ve never tried to hurt you or your family. The only thing I’ve ever done to someone on my bike is inconvenience them because they were forced to slowly and safely pass me on the road. I’m guilty of that.

And unfortunately for you, dear tagger, not all cyclists are as forgivable. The cyclists may ride out in drones now because you want them off the road.

I hope that your misspelled message isn’t responded to with more violence. Violence begets violence.

My hope is that us cyclists take the higher road, that we keep the rubber side down, and our chins up. You will not deter us. 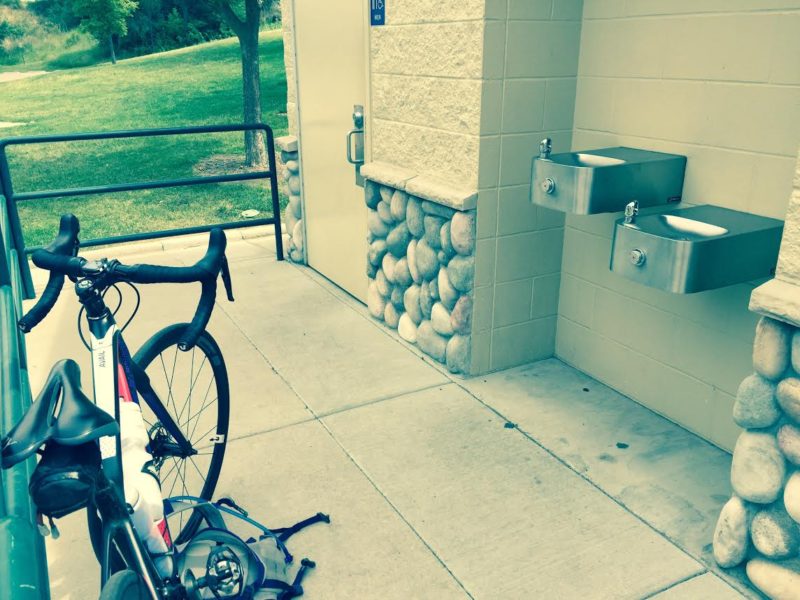