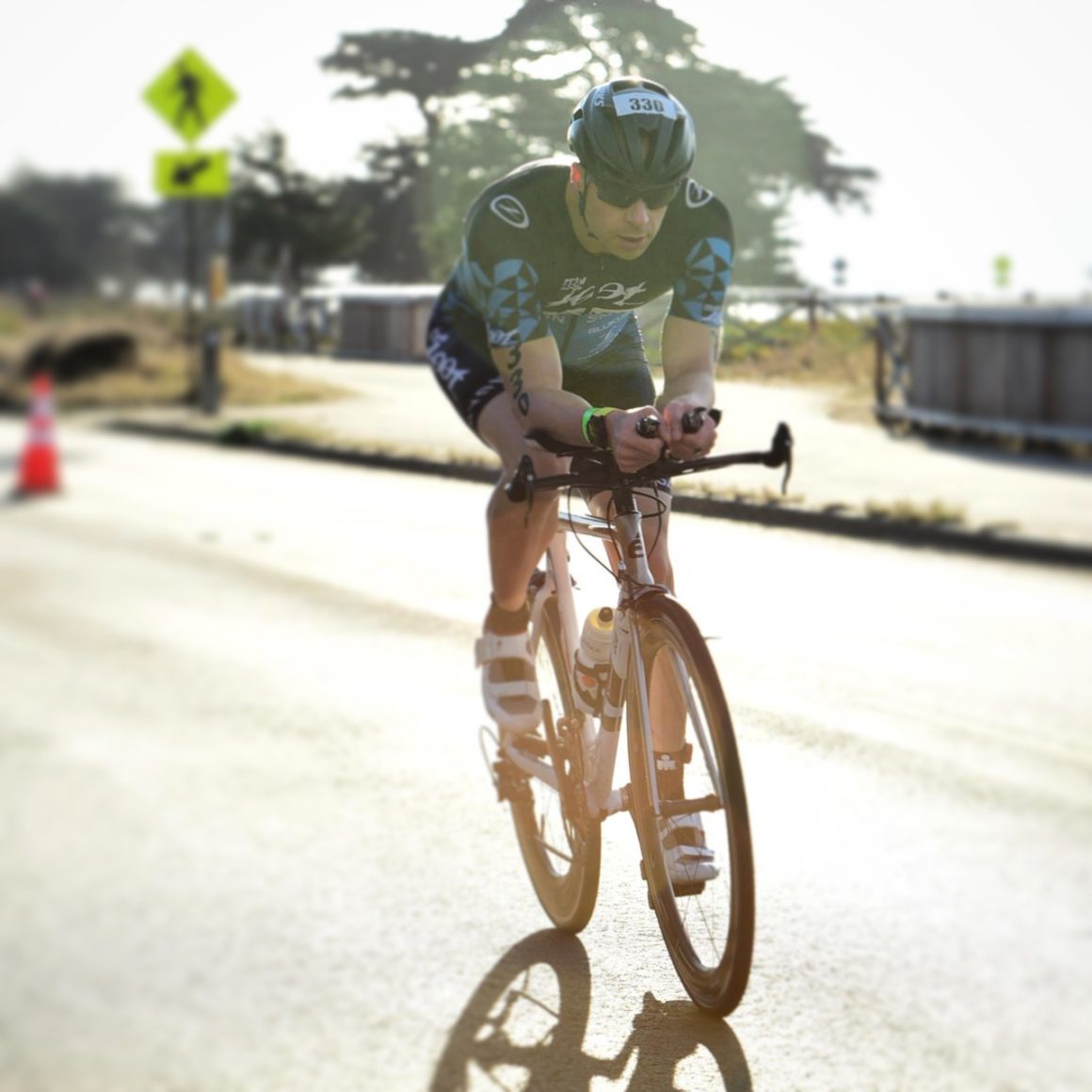 My season has been an interesting one. I had a very successful build into IRONMAN Boulder, but life got in the way and I didn’t have the time (or motivation) to continue that level of training. I really peaked in June walking away with back to back first places finishes, but by the time August got here I was not on top of the game.

IRONMAN 70.3 Santa Cruz was my tenth triathlon of the season, and my fourth 70.3 for the year. I may have been over zealous when I planed my 2018 season.

Even though I was not where I wanted to be fitness wise for IRONMAN 70.3 Santa Cruz, I was still excited to race. And I was even more excited for the trip, because I planed to propose to my long time girlfriend, Lauren.

The first challenge for IRONMAN 70.3 Santa Cruz, was getting my bike there. There were not transport services at this race, so it was either check the bike on the plane or ship it out there. The other issue was that I moved and my bike box got buried somewhere in storage. So I decided to try BikeFlights.com, and I’m happy I did. I was able to order a cardboard box from them and get my bike shipped both ways for under $100!!! Was waiting for me at the hotel when I arrived.

Lauren and I flew into San Francisco. I arranged to rent a Nissan Frontier pickup truck to make getting the bike around easy. We got in early on Friday and decided to check out some shops in San Fran first thing. After that we headed to Cupertino to check out Apple’s campus, it was quite the experience. Then we drove into Santa Cruz and got checked into the hotel.

Athlete registration started that days so I figured I’d check in and get that done. It was a good time to do it too, as there were not many people there. After we went down to the wharf to grab dinner.

We found a restaurant and then walked to the end of the wharf after. We hears some sea lions, then I proposed to Lauren. She didn’t believe me at first, but I assured her I was serious and she said yes. It was right at sunset, just beautiful.

Getting to a race two days before was a good idea, it really made things easy and we were able to enjoy the day on Saturday. All we had to do was drop off the bike at transition. Oh and assembling the bike was easier than I though it would be. Took about thirty minutes or so.

I did not workout at all while I was there, and had planned to do some small runs the two days before the race. In hindsight I wish that I would have. But I also was feeling a bit tired in my legs so I think the extra recovery was good too.

Santa Cruz was beautiful, but the weather was a little chilly. Nothing crazy, but cooler than I expected. I was a little worried I’d be freezing race morning. Especially with the 63° water temperature.

I made Lauren wake up early to drop me off at transition. That way she could go back to sleep for a while while I started the race, and we didn’t have to wast time looking for parking. I got to transition about 30 minutes before it closed. It was the perfect amount of time to get ready. It was about a quarter mile down to the beach for the swim start. Not too far but a lot bare foot.

I got down to the beach and was able to deep my feet into the water. It was actually warmer than the outside air. I wasn’t cold waiting in my wetsuit so that was positive. I was also able to see the pros start which was a ton of fun. I was rooting for Ben Hoffmann to win. He ended up getting second.

The swim start was rolling just like all of the IRONMAN 70.3 races I’ve done this year. At Boulder I seated myself to fast and got swam over a little. This year I positioned myself back a little and I think it was perfect. We had a beach start which meant a little jog into the water and then we were off swimming.

The coldness of the water wan’t bad, but I was a bit taken back by the salt. I struggled to catch my breath and get into a rhythm at first. It didn’t take long and I was on my way. I was swimming fast, and sighting well. We went around the Wharf where I proposed to Lauren, so it made it pretty special.

The way back to shore we got a little push from the waves. But I also had to fight some seaweed. When I got out of the water I looked at my watch and was very happy with what I saw. I had just had my fastest 70.3 swim!!!

Unfortunately, there was a very long run to transition. So this transition time was over six minutes which wasn’t ideal. But everyone else had to do the same too.

I got out onto the bike and was looking forward to the views along the coast.  We started on the roads though Santa Cruz and I almost got taken out by another cyclist. There are some good photos capturing the incident.

Once we made our way though Santa Cruz we got on the Pacific Coast Highway for the majority of the ride. It was absolutely breathtaking. The course was an out and back so I was looking forward to being able to see the pros on their way back.

While there were no major climbs on this course, it had it’s ups and downs, mostly rollers. It felt like a headwind on the way out and a tail wind on the return. Not my fastest time, but it was solid given my current fitness.

I was able to catch a glimpse of Ben, who I though was leading the bike course by a pretty big margin. Then I saw Andrew Talansky and shortly after a group with several pros. That gave me a good a good bit of motivation.

Part of the run course went by the road that we biked in on. As I was headed back to transition I was able to see more pros out on the course. It was hard to gauge position at that point. But right around the lighthouse about a mile or so from the finish I saw Ben again. I yelled out “Go Ben” I was convinced he was in the lead.

I got into transition and had a flawless dismount! I got my rack and was out the gates onto the run. Very good transition 13th fastest which I’m proud of.

As I headed out onto the run course we ran right by the finish and up a rather steep hill. My head was down and I head some cheering. A guy behind me said their goes our leader. I didn’t get a chance to see, but soon after I saw Ben run by. Convinced he was in the lead I wondered what the guy was talking about. Right after ben was Justin, I figured he had to have been in 2nd or third, never the less a great podium for the guys from Boulder. Turns out Ben got second and Justin third.

So the run did not start out well at all. I was moving at a decent pace, but my legs were tight. They downright hurt. The good thing was at sea level I didn’t feel winded at all. But I knew it was going to be a challenge to run though the pain. I really wish I would have ran the day prior to the race.

At mile two I had to pee. I thought maybe if I took a minute my legs might feel better. Unfortunately, as I approached the second aid station two guys in front of me ran right into the porta pottys. I didn’t want to wait, so I held it till mile three. As I approached some spectators were walking towards them. I jumped in front saying I was sorry, but I feel it was justified as I was racing.

That small break was just what I needed. My legs started to loosen up and I was picking up speed. One of my legs actually fell asleep for a little while but by the time I got to the halfway point I was clipping along at a very good pace.

There was a loop in Wilder Ranch State Park that was quite breath taking. I wish that I had photos of the beautiful coast line and ridges that we ran right up against. It was at this point I knew I was feeling good and it was going to be a good run.

Suddenly the people that had passed me before, were dropping behind me. I enjoyed the views and cruised on in toward the finish.

As I approached the light house there was only about a mile of run left. I was hurting, but I pushed. I wasn’t going as fast as I wanted to, but as fast as I could maintain. Suddenly there was the wharf, I knew the finish was close.

You run down a steep hill and then onto the beach into the finish chute. This was quite the challenge as I rocked though the finish line stumbling a bit. I had just completed IRONMAN 70.3 Santa Cruz! What an amazing race.

I had a fast swim, solid bike and really good run. While I wanted to come in under five hours, missing it by just seven minutes wasn’t so bad. Had my preparation been a little more solid I think I could have made it happen. Given where I was fitness wise I’m more than happy.

I met Lauren and we walked back to transition. I was able to get my bike out early which was nice. We went back to the hotel and I packed it up in just about 30 minutes!!! Then went out for a lovely celebratory dinner. After we drove along the coast where the run was so I could show Lauren how beautiful it was.