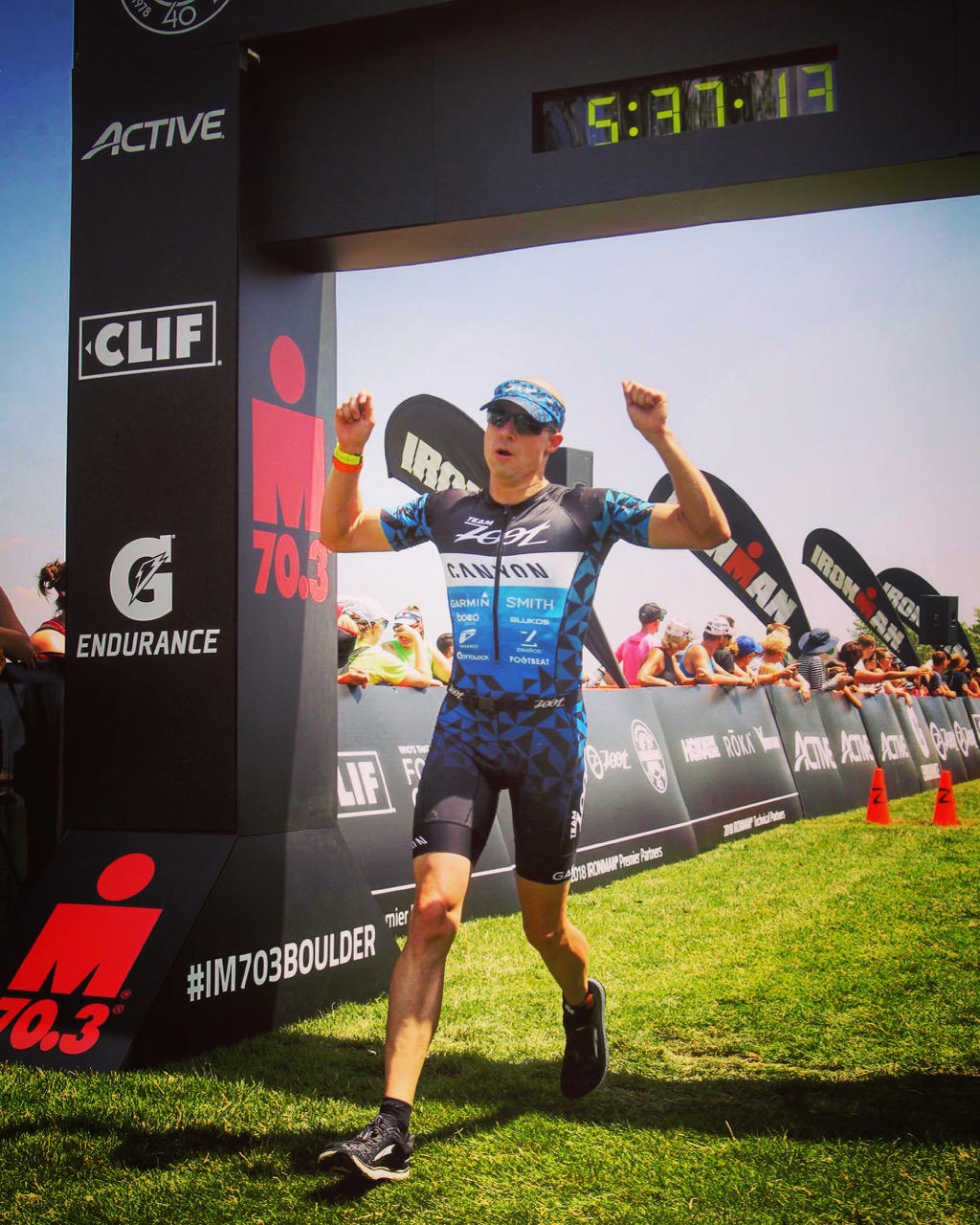 This was my second year competing in the IRONMAN 70.3 Boulder race. Last year I had a great race and I was looking to improve upon that performance. It was also my third half IRONMAN distance of the season.

Last year there were several issue I ran into, and this year with that knowledge in hand I thought I would have an advantage. The first was parking. It was a nightmare last year. I was stuck outside of the Boulder Reservoir for an hour before the race. I needed up having to sprint from transition to the start of my wave. This year I planed ahead and came in the back way. There was still traffic, but I missed it all! I had plenty of time to get ready in them morning.

This year there was a rolling start on the swim. You seat yourself in the wave that is closest to your projected swim time. I was looking to swim the course in about 35-34 minutes. So I got in line in the 33-35 minute wave. I might have been a little ambitious with this prediction. Once we got rolling I got swam over quite a bit. The start of the swim was quite rough actually. I had a leak in my goggles an then dealt with fogging issues. I got that all resolved but then I kept getting hit by other swimmers, one actually stopped my Garmin. All of this cause a not so great swim. I wasn’t bad just not ideal. As I got out of the water, I didn’t pay attention to the time. Since my watch got stopped I knew it wouldn’t be accurate. I would just go forward and focus on the race. There was a little struggle to get my wet suit off, but I got it done thanks to the wet suit strippers.

Transition was long and it seemed like it took forever to get to the mount line.The bike went great and it was a fast course. This year the course was the same as the full IRONMAN course I raced back in June. Only one lap though. So I knew that it would be fast. Apparently not as fast as last year though.

I have to say the bike course was pretty uneventful. I was able to work at it and keep a consistent speed. However towards the end of the course I noticed that my crank arm was coming loose just like in the full IRONMAN. I stopped at the last aid station to tighten it. I knew it kill a minute or so, but better to be safe than sorry.

I was feeling pretty good and was ready to crush the run course. But the run course had different plans for me. First off it was hot, really hot. As I ran out of transition I could feel the heat.

Once you ran out of the resevour there is a small downhill section to the first aid station. This is a great place to relax and settle into a good pace. Last year this was the spot that I could tell I was going to have a good run. Thing felt different this year though, not bad, just not good.

I made it though the first lap of the course and was looking forward to knowing I only had one more lap to go. I was getting tired and my pace was slowing. The second lap hurt and as I approached the second to last aid station I had to walk. I got some water and a little Coke, then I picked up my pace and headed towards the finish line.

The entire race I didn’t pay much attention to my time, but I had a good idea of what I had done on the bike. I was feeling like I was on track for a good race. I knew my run wasn’t great though.

I walked through the final aid station, composed myself, and took off as I knew the finish line was just around the corner. There is a bit of zig zagging before the final approach. As I came around the corner Lauren, her parent and Jacob were there. I gave Jacob a high five and ran to the finish.

The race was over and I was exhausted. I stopped my watch but I new the time wasn’t accurate, unfortunately it was over five hours, not what I wanted at all.

It was not my best race, not the performance I was hoping for. Again my run killed me and I know I still have a lot of work to do. The honest truth in all if this is I need to do more work to get myself to the level I want to be at. Life has gotten in the way of training, which is okay. But I performed the best I could with the preparation I had.