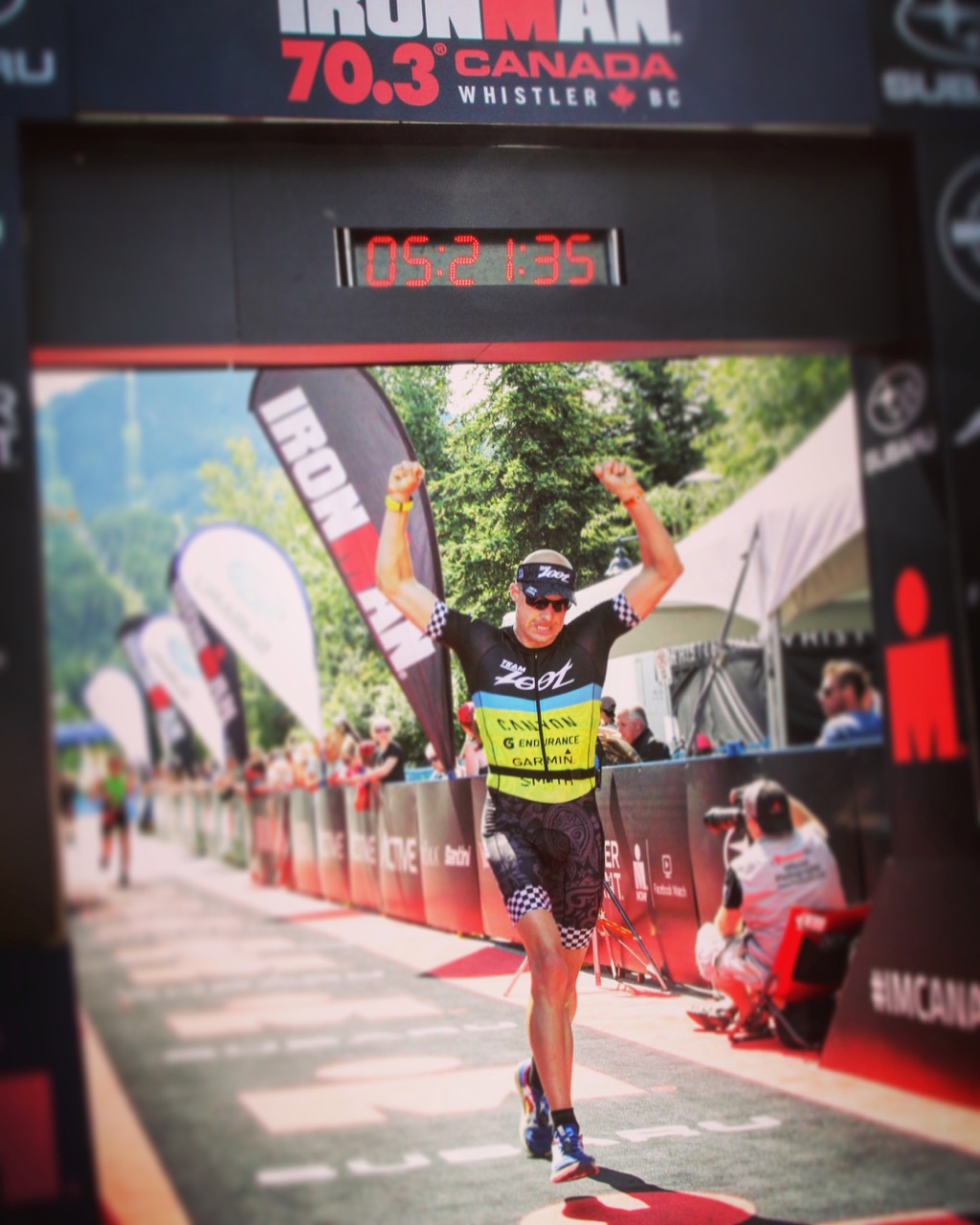 The results from IRONMAN 70.3 Canada have left me uneasy, unsure, and underwhelmed. It wan’t a bad race, and I can’t say it was a good race. The hard part is to see the result as my slowest IRONMAN 70.3 to date. However, it was a challenging corse.

First off, Whistler was amazing. What a beautiful part of the world. Lauren and I flew into Vancouver and got a rental car to drive up to Whistler. It was dark when we got in so we missed a lot of the scenery on the way up. We were able to check it all out on the way back though.

The next morning we woke up and got breakfast. I needed to get to IRONMAN village to get my bike from Tri Bike Transport and check in for the race. I got a little lost trying to get my bike, but we got it all worked out and had time to watch the athlete briefing. It all took place is the Whistler Olympic village which was kind of cool.

Next I had to get to T1, to drop off my bike. This was at Rainbow Park at Alta Lake. I had read that you can ride your bike there as it was not too far away. I wasn’t exactly sure how to get there, but the path that ran right by our hotel took you strait there. I rode out and got everything setup in transition. It was very beautiful out there.

They had shuttle busses back to town, but the line was crazy long so I decided to jog back as I needed to shakeout run anyway. I got back and Lauren and I spent the afternoon shopping.

Race morning I woke up early and got ready to go. I walked to the Olympic village to catch the shuttle bus to transition. I wasn’t given a morning clothes bag and I couldn’t find anyone to help me with that. I was getting a little nervous. There was also a really long line for the shuttle bus, but it went quick.

Once I got to transition I double checked my bike and all was good. It was a cool morning and there was steam coming off the lake. It was quite a sight. I was able to track down a morning clothes bag and got ready to race.

Because there was a full IRONMAN and a 70.3 going on that day, but the time I was getting out of transition the full already had people getting onto the bike. There was a bridge to get us to the swim start but the line was crazy. After I finally got over it I squeezed my way into the swim start. The problem was I couldn’t line up to my pace zone. I somehow was towards the front and not sure what time placement that was. I was a little nervous that I would be swam over.

As the rolling swim start began I tried to make sure I was back far enough I wouldn’t be too far mixed in with the fast swimmers. I was also worried about the water temperature. But once I got into the water it felt nice. The water was crystal clear, it was a great lake.

They swim went well, I had a good pace and I kept it relaxed. As I saw towards the exit I remember feeling good about my swim, but also feeling as if I could have pushed the pace a bit more too. I got out of the water and headed over to the wetsuit strippers. I found my bike gear and headed into the changing tent.

One of the advantages of having both the full and half distance races going on tother is that you get some of the perks of the full distance race, like the changing tent.

The changing tent was mostly empty and I found a chair and got ready for the bike. I was feeling good, a little cold, but ready to get out there. I ran through transition got my bike and hit the road.

I can say this, it was a hard course!

It wasn’t that it was anything crazy, it was just a challenge to race. The climbs were gradual, but intense. And the descents were fast! The first part of the course I was freezing but temperatures eventually rose and dried out and warmed up.

Before leaving for Canada, I tried to figure out if I should ride a disc wheel or not. I saw a few people that had ridden one in the past, but it was not all that common. I did opt to use the disc and it worked out okay. The wind did pick up a little but not enough that it affected me.

The ride was beautiful and even the challenging Callaghan road took you to heights that I probably wouldn’t have seen otherwise. We went out to the paralympic park.

There was a lot of leap frogging on on throughout the bike course. I kept seeing many of the same people out there. There were also a lot of full distance athletes around too. I was happy I didn’t have to do two loops of that course.

My time on the bike course wasn’t bad but it was getting a little long and I was defiantly tired at the end. The last couple miles of the course right though Whistler and there was a lot of people out cheering. This was a great motivating factor. I also rode right in front of the hotel which was kind of exciting.

I rode into transition and blasted through. We got bike catchers, which was nice because you didn’t hav to worry about your bike. Again the changing tents were almost empty. As I left I decided to use the bathroom so I’d have a good run.

The start of the run was hard, there were some hills on dirt and you headed up and up and up. My pace started out good, but the hills got me and I settled into a decent rhythm, but couldn’t hold the pace I wanted.

The run course was pretty cool. Parts were through the rainforest where it was almost dark from the dense foliage. We also got to run out by Green Lake where there were sea planes taking off. Lauren and I wold go river rafter there the next day too.

As I got to the last part of the run, I was closing in on a women that had passed me earlier. I was feeling good about this, but suddenly I felt some pain in my hip. I had never felt anything like this before. It wasn’t horrible, but it wasn’t right. My pace slowed and I saw the women fade away into the distance.

I only had a couple miles to go, I knew I could finish, but not at the pace I wanted. I kept going and tried walking though and aid station to get some relief. Things got a little better, but I still couldn’t hold a good pace.

The last section of the run took you through the Whistler village stroll where Lauren and I were shopping the day before. It was a great end to the race. There were lots of on lookers. Right after that section you went back out of a street to run into the chute right behind the olympic village.

It’s always a great feeling running down the chute, my leg hurt and I could feel a limp in my stride but I made though and had finished the race.

My time wasn’t great. Five hours fifteen minutes. My slowest 70.3 to date. That was hard to take. I dd however have a good swim and run. And the bike was not an easy course. Leaving with that information I was okay with my result, but of course I wanted more out of this race.

I train hard, and sacrifice a lot to race IRONMAN. It’s hard to get results that aren’t what you hoped for. But I’m realizing that being at the top might not be worth what it takes to get there. Finding a balance is difficult and I know that what I have to do. I need to race against myself and I know that if I can put in the best effort I’m capable of, that’s okay. While I had a desire to get on that podium, I also need to enjoy my life. This race taught me that it’s time to take a step back.

After the race Lauren and I got to have some fun in the Canadian mountains. We went zip lining and then rafting the next day. I still had my race numbers on and everyone was so impressed I was doing these activities after racing.