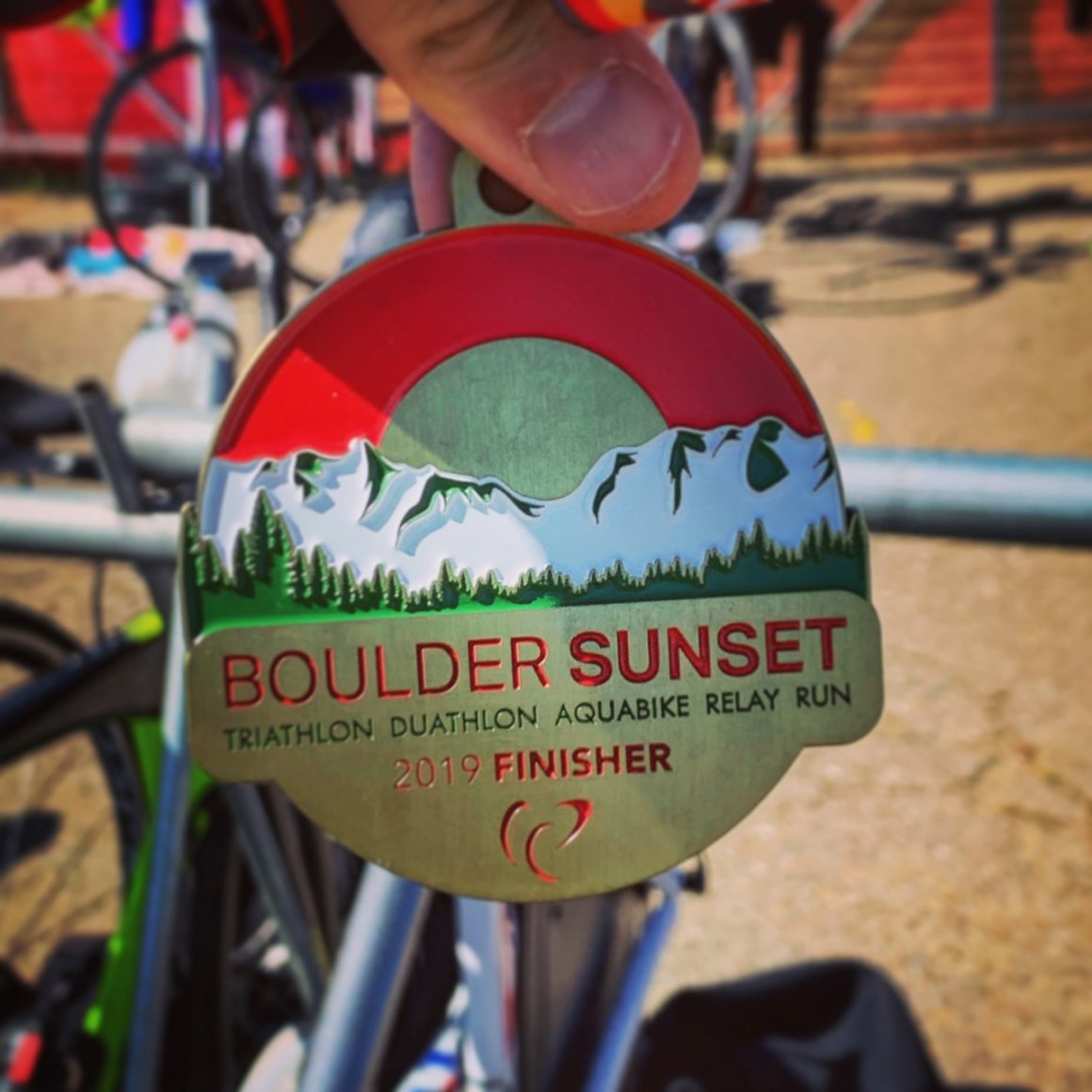 I decided to give the Boulder Sunset Triathlon another go this year. I’ve done this race a number of times and it was my first podium in an Olympic distance race. It’s a familiar course and I had high expectations going into the race. I originally hadn’t planed on doing this race, but added to my schedule late as I felt I needed another race in the season.

Training for this race wasn’t going great. I was still recovering from IRONMAN 70.3 Canada and hadn’t hit the mark as far as the my workouts we’re concerned. This wasn’t a high priority race, but I still wanted to preform well.

Race morning I made sure to get to Boulder Reservoir early so that I could get a good spot and fit in a proper warm up. Do to some construction going on at the Reservoir the layout of transition was a little different than in the past. I got a good spot right by the bike out.

I did my run warm up then got into my wetsuit for a swim warm up. Unfortunately, I didn’t have a lot of time for the swim, but was able to get in about 10 minutes before we got kicked out of the water.

For the swim we lined up on the shore. And like all of the races at Boulder Reservoir, we would swim directly into the sun. As I stood on sore before the swim a boat moved right infant of the first buoy making it hard to see. I positioned myself in the middle of the from of my wave. As the swim started I couldn’t find the first buoy. I stuck with the group hoping for the best.

Eventually I came up upon a buoy and I’m still not sure it was the right one or not. From there I was able to see the next buoy and able to sight as I should. Other than the uncertain start I was swimming well and noticed I was pretty much alone for most of the swim.

I would be the 4th in my age group out of the water, a pretty good position for me!

It was a long run back into transition, but I made it to my bike and got my wetsuit off. It was really nice being right by the exit and I didn’t have to go far at all. I mounted the bike and headed out onto the bike course.

I told myself that I really needed to push the bike as I had been noting doing so good on the bike this season. The wind picked up and the it was a bit of a grind out there. I felt really good about my effort though.

As I headed out of the Reservoir one of the guys I wanted to beat passed me on the bike. While I didn’t know what position I was in at that point, I mentally put myself in 2nd and tried to hold on to him. Although I did loose him in the distance.

I was getting passed a bit which wasn’t great. But I felt as though I was putting in a good effort. I noticed my time wasn’t great and I was on the last section of the bike. I made my way back to transition, which was a bit messy. I was right there at the front where everyone was going in. I had to dart around some kid that was taking their time. I felt bad but it’s a race!

I was able to get though transition quickly, but because of the change in they layout I didn’t know where the run out was. I asked one of the volunteers but they looked at me like I was crazy. I finally found it in the opposite corner and took off.

The run was interesting.

My legs didn’t feel good. I was able to hold a pace, which was okay but I know it was slower than what I had been running. Looking back I held a very steady pace.

Durning the run I knew I wasn’t having a great race. I guess it wasn’t bad, but again I wasn’t improving and I was feeling disappointed. I was realizing that being on the top end is hard and it takes way too much. I have other priorities in life and winning is not everything.

Just before I hit the turn around point for the run I saw the guy I was trying to beat come back. This showed me how far behind I was. Probably a couple of minutes. It gave me some hope.

I finished that race, not really knowing where I was. I knew it wasn’t my best race, despite a very good swim for me. I went to check the results and was devastated when I saw I was in 7th. I’ve always finished this race in 3rd or 4th, so it was hard to see,

Although when I had some time to look over the results I noticed that I wasn’t too far behind the leaders. I think people showed up to race that day and the wind played a factor in the overall time. I didn’t have a great run and I’m okay with that as I gave it all that I could.

So I’m not sure what’s next, since this race my training hasn’t gotten any better. Evaluating priorities it’s difficult to fid a good balance between competitively training and family time. I’m making some changes to make sure I have more family time and we’ll see how my racing is affected. My main goal is to be healthy and fit, and that doesn’t require winning every race or training in all my free time. The one thing I do know is that constancy is important. So the struggle will be too keep it up and turn back the volume. But I think that will keep me in a good place. Time will tell.