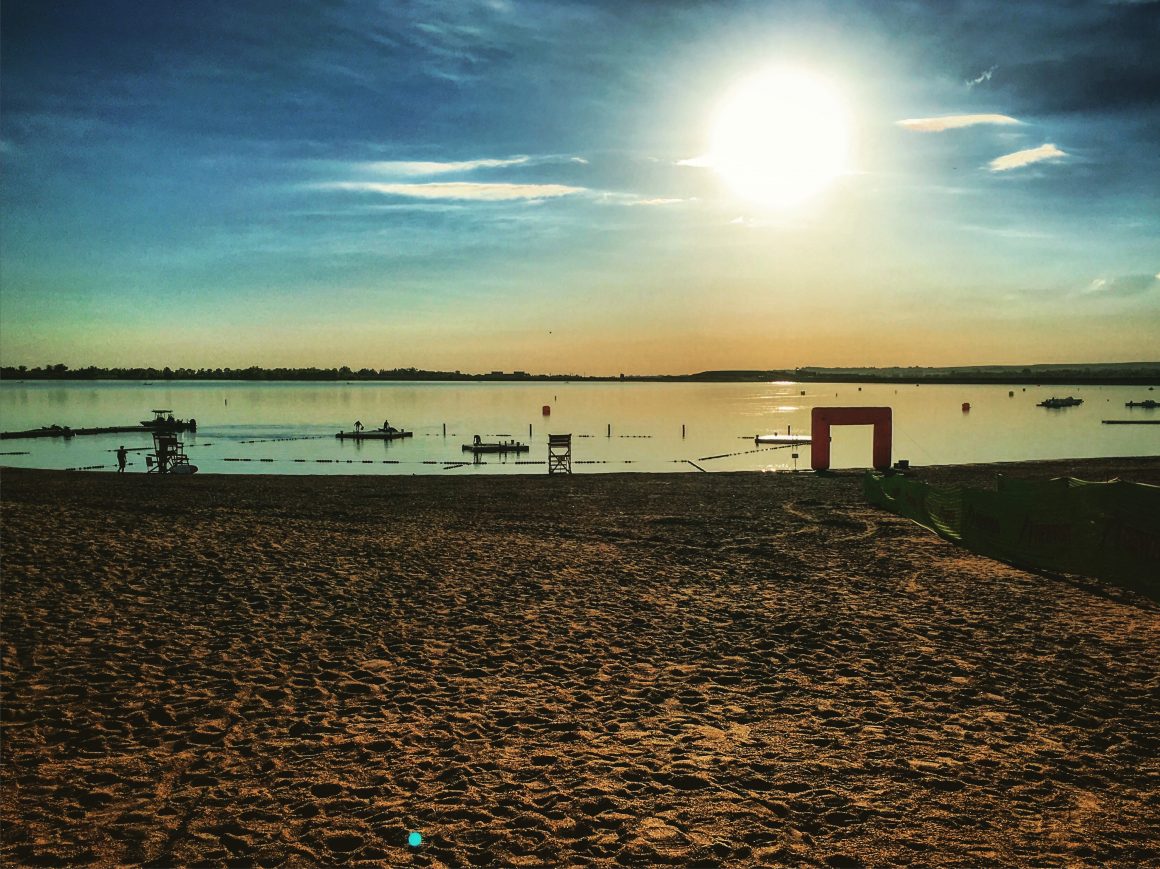 The Colorado Triathlon was my second triathlon of the season. I wasn’t sure what to expect going into this event, but I have to say I was very impressed with every aspect. I only signed up for the sprint distance. The original idea was to work my way up to an olympic and then to the 70.3 I’ll be dong in September. Since I added the Rage Triathlon back in April to my schedule, I had already completed the olympic distance. I’m glad I stuck with the sprint though.

Transition opened at 6am, so I had to get up to Boulder Reservoir by then. That meant for an early morning. I got to bed a little after 8pm, which isn’t so bad if it weren’t for the sun staying out so late this time of year. I was happy to get a full eight hours of sleep though. I didn’t feel super prepared in the morning, but I had everything ready to go and headed up to Boulder at about 5:30am.

When I arrived at Boulder Reservoir I was guided in and parked. Seeing everyone get their bikes off their cars, my nerves kicked in. I was excited at the same time. There I was ready (or maybe not so ready) for another race. Boulder Reservoir was nice, I was surprised how clean it was. Definitely a great place to race. 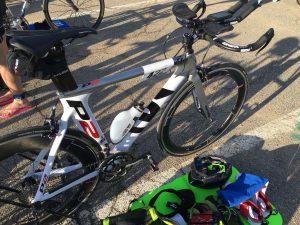 Transition was bustling when I got in. I first stopped and picked up my timing chip, then headed to find a spot to rack my bike. I wasn’t really sure where to setup, so I just picked a random spot in the middle. It worked out well. I got body marked, then got everything laid out. There was a group of friends doing their first triathlon across from me. It was fun to hear them talk and ask questions.

I’m always nervous to get in the water, but I new it would be best if I got in and did a few laps to warm up. I was shocked how warm the water was. They said 68° and it sure felt it. The water wasn’t clear, but if felt very clean. I did a short lap around the warmup area and then listened to the race announcement. 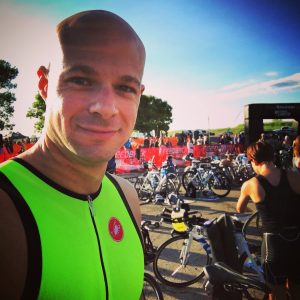 The Olympic distance athletes got to start first. It was nice to be able to watch them take off. I was in the 5th wave, the first of the sprint distance. I have always been a little worried about the swimming portion and this was not exception. My strategy was to just swim and try not to freak out. It worked well. We started the swim and I just went for it. We headed into the sun to start and that made it a little difficult to see. I just took it easy and focused on spotting occasionally. I wasn’t doing a great job as I often found myself drifting off course from time to time.

The swim was slow. A lot slower than I wanted it to be, but the swim went well. So I have to admit that I’m happy about it. I finally feel like I have more confidence in the open water now. And I know I need to work on my sighting.

I struggled a little bit in T1. I had a hard time getting my wetsuit off and also my feed had lots of sand on them. I made the mistake of not wearing socks in my last triathlon, so I took the time to put them on. I finally got setup, grabbed my bike and I was off.

The bike portion went well. It felt great out there and I was passing just about everyone. There was no wind and the temperature was perfect. I was flying and felt so confident. My heart rate was a little high, but I told myself this is just a sprint so I should go hard. The start of the course was a little crowded, but it thinned out nicely once I got further in. Towards the end of the course I was just about the only one out there. I heard a noise from behind me and looked. A woman on a really nice P5 flew by me. I knew there was no way I could keep up with her.

When I finished the bike I was feeling confident and I ran in to T2 and got ready to run. The transition went well. As I was starting the run course the overall winner was coming into the finishing coral. I knew he has a good 25 minute lead on me, damn. 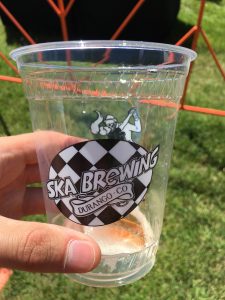 The run did not feel great, I wanted to push harder but didn’t have the juice. My legs weren’t happy I think I’ve still not fully come back from the Colfax Marathon and BolderBoulder. I had forgotten to turn off my heart rate alarm on my Garmin, it wouldn’t stop beeping and was driving me nuts. I pushed though but was getting passed a lot. A little past the halfway point I saw a guy in my age group pass me. I knew I had just lost a place, but I couldn’t keep up. I pushed hard to make it to the finish. As I approached I got a little confused with where I was going. I knew there was a giant slip ‘n slide at the end. I had made up my mind I was going to do it. But when I got to the end it looked like the slide was uphill so I skipped it. Maybe next year since I know how it all works now.

I got a finishing pint glass and a bottle of water at the end. I was really looking forward to the water. Transition wasn’t open so I wasn’t sure what to do. I checked out my results and saw that I had come in 7th in my division. Not as well as I wanted to do, but I was happy. I saw a few RMTC members and decided to introduce myself. Then the beer tent opened. Free beer! It was only 9:30 in the morning, but I had earned it.

I hung out for a little while longer and watched the awards. It was a good time and a good race. I have a solid grasp on what I need to do to continue to improve. Now that I’ve completed three triathlons, I feel it’s safe to call myself a triathlete. Now I can focus on improving my times and work my way to the podium.