My cycling buddy, Jared and I wanted to get in a long ride and an incline over Labor Day Weekend. Instead of resting our feet, we labored.

Saturday, we decided to stick to our area: We went up the frontage road along C470 to Clear Creek Trail to the Platte River Trail, through Cherry Creek, and then through Parker, back along C470. 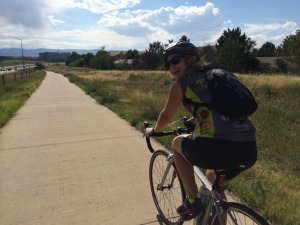 This is our route, all 95 miles of it. I don’t even remember the last time I drove 95 miles in one sitting. Both of us had stayed out late the night before, so we started the ride probably later than we should have. Ideally, we try to aim around 8am, but I don’t think that ever happens, and Saturday it was closer to 9:15. Unfortunately, during summer, when we start that late, we usually run into rain. Luckily, this was a very dry, yet long, ride.

This is me playing around. I told Jared it would be cool to have a picture of me looking back with the mountains in the background. By the time his camera was working, the apartments covered the Front Range. Instead, I just look like a dork that isn’t paying attention to the trail. Note: If you’re looking to test your longevity, I would recommend this route as there are some hills, but nothing that you can’t summit. It’s fairly flat and great to get used to the idea of riding for hours on end. Plus, you can brag to your friends you go through several cities and pass through three separate reservoirs.

Look at those foothills. I love living in Colorado. The route, depending on what you’re into, can be scenic at times, and when you’ve been pedaling for four hours, when you look toward the horizon, it ain’t too shabby of a view. 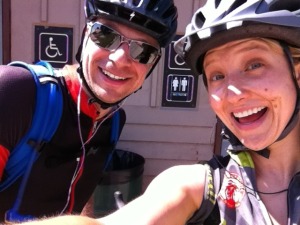 We hadn’t hit our halfway point on our 95-mile ride on Saturday, but once we made it to the Platte Trail, we stopped at the restroom. Because we were doing this ride alone, we had to rely on ourselves and what we could find to either relieve or hydrate ourselves. Organized rides do all that work for you. Luckily, the route we chose had a number of water fountains and porta potties. My advice: If you’re doing your own thing, make sure the route has easy access to bathrooms and water fountains. Hydration and exploding bladders are no fun for anyone on the trail. 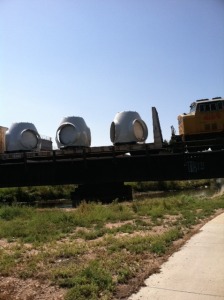 Along our bike rides I always see things I wouldn’t normally see in my car. I feel like I pay even more attention to my surroundings while I’m on the bike because I’m not inside and protected by my car. Any and all elements can affect me. As we rode along the Platte, a train with these unknown objects loaded on it choo-choo’d along. Jared and I tried to figure out what they could have been. Jared guessed they were put down manholes. They looked like legos to me. My suggestion: If you want to ride without pedestrian disturbance or running over shards of glass, avoid the Platte. I enjoy it, but there is always so many people you have to duck, dive, and dodge, and I seem to get a lot of flats going through Denver. It didn’t help we went on Labor Day weekend either. 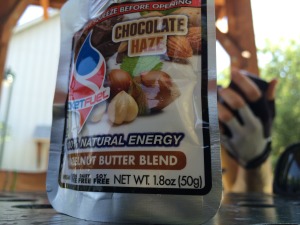 On our rides we usually only fuel up with these almond butter packs. Seeing as how we rode 95 miles on Saturday, we really should have had more to eat than these pocket fuel things, but alas, that’s all we ate, and we were definitely pushing hard at the end. I could feel every nerve and muscle in my body screaming for more fuel.
Next time, instead of trying to go hard, I think it’s more responsible to pack some of my energy bars. I also filled my water bottles with the Mio drink enhancer and I deeply regretted that. At this point in our 95 miler, I just wanted water. I didn’t want my grape-enhanced drink. I wanted ice cold water. The fountain (not pictured) was out of service. You would not want to hear how I reacted. There have been plenty of times when Jared ran out of water and it was kind of sketchy. I finally convinced him to bring his camel back and he has been ever since. I have a mini backpack in which I shove two water bottles and my equipment for my bike. If I could easily lug around a giant jug of water, trust me, I would. 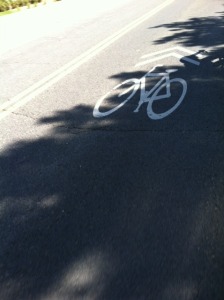 I love seeing pictures of bikes along the rode as I cycle. I have developed the fear of being hit by a car. Any time I hear a motor, I grip my handles tighter (probably why my hands are numb at the end of my rides). Seeing markings on the road or signs posted on streets make me more comfortable being a road cyclist. I mean, just because there are signs doesn’t mean a car will abide. And I have heard plenty of horror stories of people getting hit by cars or harassed. At least when I see those two wheels, I know I’m not breaking some motor vehicle/bicycling law.We use Map My Ride and Strava on our bike journeys and they do show other routes cyclists have created. You can utilize that when starting new routes if you do not feel comfortable just going for it. 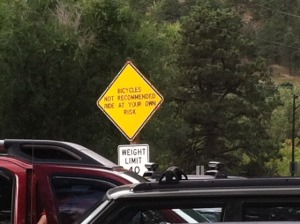 When I see signs like this, I ask myself, “Is it worth it?” And before I can answer in my head, I’m already pedaling past the sign. Sunday, Jared and I rode up Boulder Canyon. And when I say ride, I really mean “struggle.” We struggled hard up that canyon. We were determined to bike through, but unfortunately, the weather took a turn for the worse: the wind picked up and it started to sprinkle. We once rode through Golden Gate Canyon through rain and it was awful. Absolutely awful. We wanted to keep a positive experience of Boulder Canyon, so we turned around. If it weren’t for the cars, the descent would have been fabulous. Unfortunately, with the cars buzzing by and the giant potholes that could have sucked both myself and my bike in, I couldn’t enjoy it as much as I wanted. I was too worried if I went too fast, I’d lose control and slam on to the ground. Then, of course, a truck would be passing at that exact moment and I’d be squashed like a pancake.

Also, communication is key; and when I say “communication,” I mean the nonverbal kind, like hand signals. I lead the way downhill and any time I saw a pothole or something weird, I did a few spirit fingers for Jared. This helps him and I have noticed it has helped me when I have cycled with someone and they pointed that out in advance.

If (when) I redo this route, I’ll definitely aim to get there earlier in the morning. We didn’t start until 9:30ish and the rain came in a lot earlier than expected. We usually take a peek outside to see the weather because we can never trust the weather reports. Unfortunately, neither of us live in Boulder, so we had to rely on the report and of course, as usual, the rain didn’t come when it was expected.

'A Picture is Worth 100 Miles' have no comments