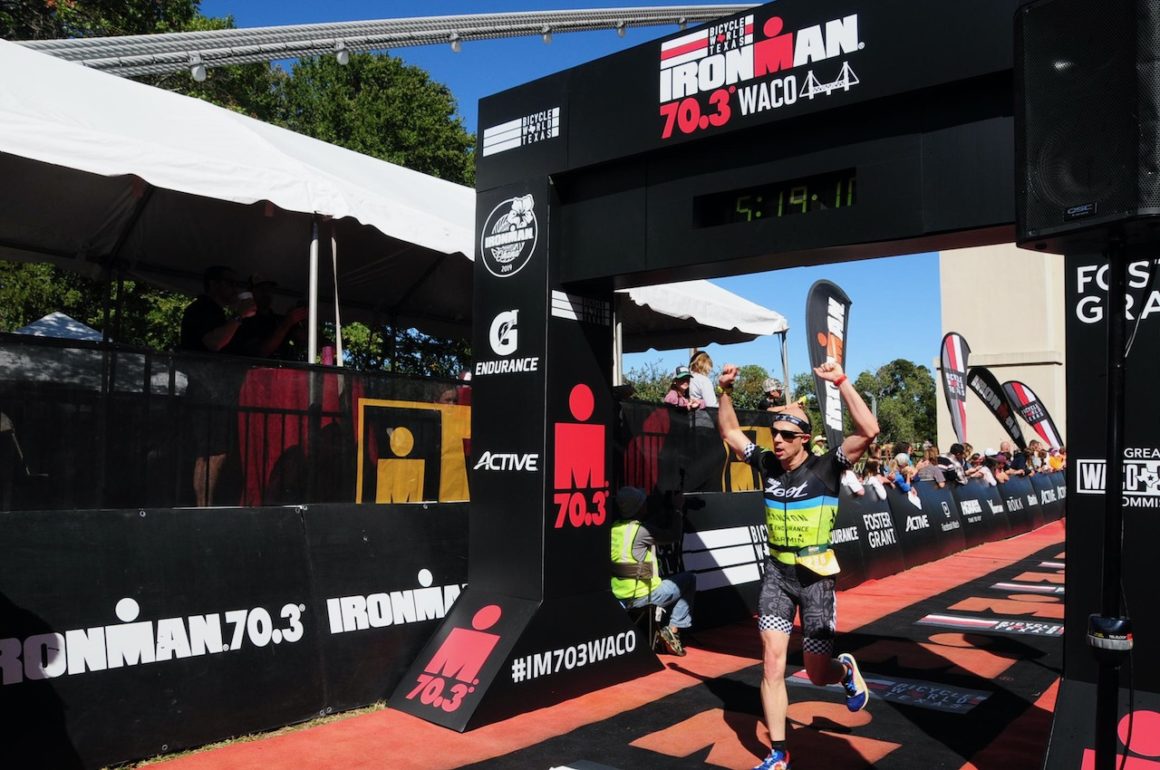 IRONMAN 70.3 Waco was a late addition to this year’s race roster. I wanted to squeeze in a 70.3 in my final build to IRONMAN Arizona, and Waco was a good fit. Not only was the time perfect, but we were able to visit family in Texas at the same time.

We flew into Dallas late on Friday night. The next morning we had breakfast then dove down to Waco, which was only about a 90 minute drive. It was really easy to get to Waco and I got to see a new part of Texas. We drove strait to athlete check in and wow it was busy!

For the first time it really paid off to be an all world athlete. The check in line was long, but I was able to walk right up with the AWA privilege. I got all checked in but then had to go get my bike from Tri Bike Transport and get it ready in transition. That was a breeze too, although the transition was a bit of a walk from check in.

Once I was done we had time to go explore all that Waco had to offer. For a smaller town, there was a lot to do and we spent the afternoon at the Magnolia Market, which made my wife very happy.

I got a cheap hotel room a little outside of town, so I had to make my brother in law get up early and drop me off on race morning. I got into transition while it was still dark out. It was a little hard to setup in the dark, but I got it done. I’ll have to remember to bring a head lamp in the future.

I was looking forward to the swim course as I thought we’d swim down the Brazos river and it would be a fast swim. Unfortunately, I quickly realized we’d be swimming against the current!

The swim was a point to point swim which ended near the IRONMAN village a good ways form transition. We also had to walk to the swim start which was just about a mile from transition. This made for a bit of a walk before the race. But it was all good. I had brought and extra pair of shoes for the walk which was a really good idea.

It was rather chilly before the race, the sun was just starting to poke out and the temperature was in the 40’s. The water temperature was somewhere in the mid 60’s. I had gotten to the swim start pretty early so I lined up towards the front. They didn’t mark the swim times very well so I think I got grouped in with some faster swimmers.

This swim was not one of my favorites. The water was colder, although it really didn’t feel to bad. It was crowded, although I think that partly because I lined up a little bit too close to the front. And the water quality wasn’t that great. The nice part of the swim was that it was strait down the river with only one turn to the shore to the swim exit.

I felt good about the swim and was able to swim strait for the most part. Sighting was a little hard and as the sun came up it got even more challenging. But somehow I keep a strait line and didn’t struggle much. I did get swam over and hit a lot. My watch got turned off twice! But the end of the swim came up quickly and I headed out of the water.

Transition was long! It was a ways to get to the bike. As I ran a long I passed the wetsuit strippers which were hidden over to the left. I thought about heading back but didn’t want to waste the time. I finally got into transition and realized there were many bike there still. One of the guys in my age group was there, heading out on the bike. My goal was to beat him, so it was time to go!

I didn’t have a great time getting the wetsuit off and I was starting to get rather cold. The sun was out, but it was still cool and being wet didn’t help. I got started on the bike, but it took a little longer than I wanted.

I really enjoyed the bike corse. It was basically fast and flat! I did a lot of leap frogging with other racers tough out the course and I didn’t have many people passing me. It felt much more like races I’ve done in previous years. I managed to get a pretty good bike split out of it.

While I still have to work on the bike, I defiantly made some progress in the last couple months.

As I headed back into transition. I saw Lauren, Jacob and Michael waiting for me. It was great to see them. Although my transition didn’t go so well. My bike fell over and I had to stop to take a pee break. So again it was a little slow to get out onto the run.

My run started off strong. I was looking forward to this run because I had been running well and the course looked like it would be any easy one along the river. I quickly realized that was not the case.

We ran down the road we had to walk along to the swim start and past that area. It was there where the hill began. There were a few steep climbs that really impacted pace. These took a lot out of me and my speed decreased. Leaving that area we had some downhill to courter but it was still a challenge. The second half of the course was back along the river on the other side. This was nice and flat. I was able to recover and pick up my pace here.

As I finished my first loop I had already been passed by many pros and the leading female pro’s were finishing. It’s always fun to see how fast they are on their second laps.

I saw Lauren, Jacob and Michael again as I started my second lap. This gave me some extra motivation going into the hills again. But I could feel my legs getting tired and I knew I was going as fast as I could. Right before I crossed over to the other side of the river, I pass the guy I wanted to beat. This was a great boost and I could feel my speed increase.

The last mile of the run felt very long, but I finally made it to the finish chute. It was on a bridge over the river, quite a finish line experience. I saw Lauren, Jacob and Michael waiting there and gave Jacob a high five as I finished.

I felt good about this race and realized it was my second fastest 70.3 ever! While I didn’t get it done it under 5 hours I was only 5 minutes over! Definitely happy with how this race turned out. 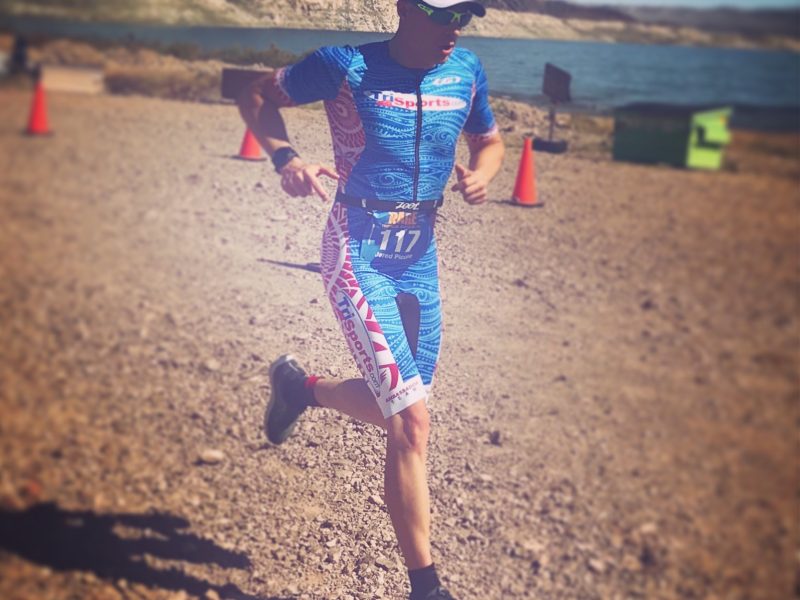 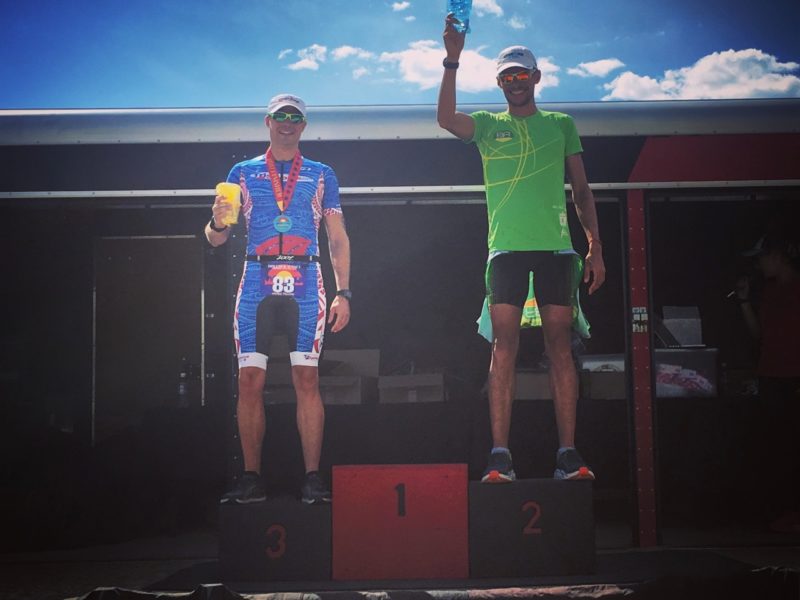