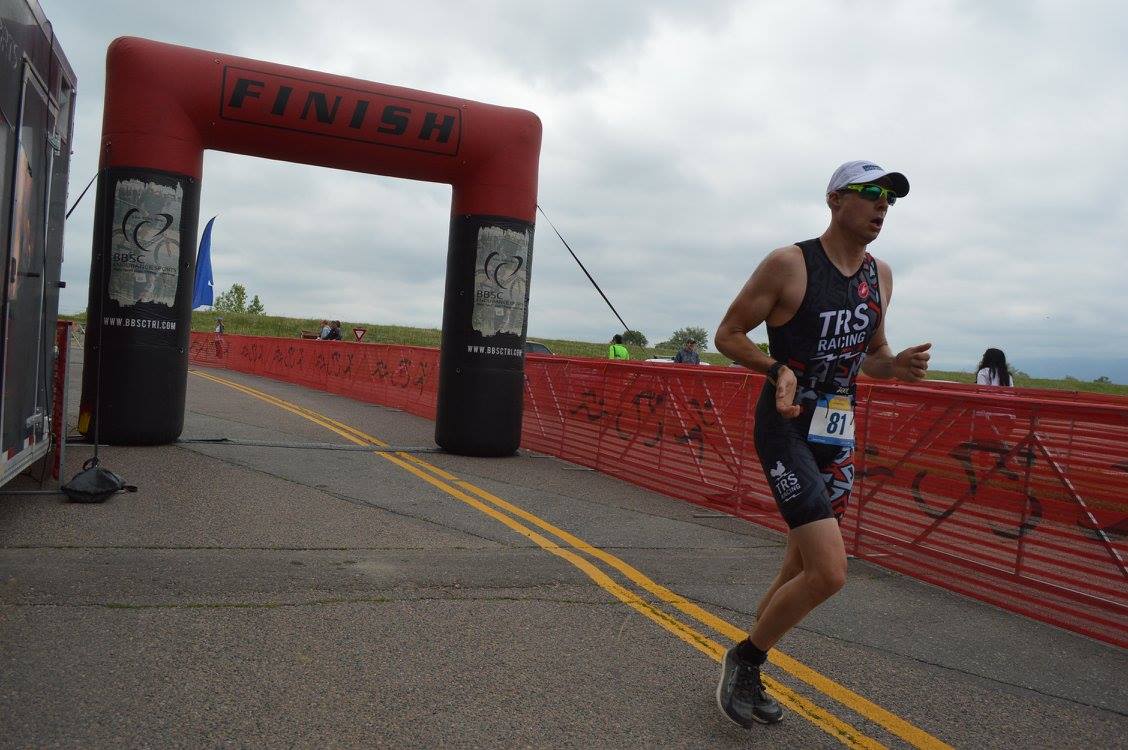 This was my second year doing the Boulder Sunrise Triathlon. Last year I did good finishing in 4th in my age group, and was really hoping to improve on that. I’ll be honest I was shooting for a podium finish, something that I would fall short of again.

It was a busy weekend and I was a feeling little under prepared for the race. Also just coming off of IRONMAN Boulder two weeks prior, I wasn’t sure how I would be feeling. I woke up early to get ready and head up to Boulder. Of course I didn’t get on the road as soon as I would have liked. The stress set it a little but it all worked out. 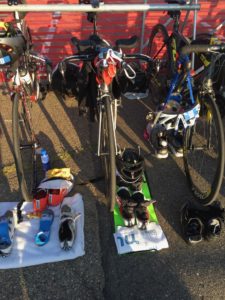 I wasn’t early to the transition area and had to squeeze into a really tight spot. People didn’t seem to be very forgiving. But I got set up and ready to go. Just as I was walking out of transition I ran into Lauren. They were sitting over by the beach. I got my wetsuit and headed that way. I was chatting a little bit and then it was about 5 minutes till the race started. So we headed down to the beach. I got a good luck kiss and then got into position.

The sun was rising and it was really hard to see the buoys. I remembered this was the same last year. I knew I got off course and had to backtrack a little.

The gun went off and we started the race. We all ran into the water and started swimming. It was crowded for a long time. As a matter of fact I felt like I was doing better that normal because so many people were still around. But all was going well and I was sighting all of the buoys. Or so I thought.

Well it turns out as I came up on the turn buoy, I had been sighting the wrong one, along with many others. I realized this quickly and was able to correct. I was a little bummed and wondered if this would hurt my race. I finally made it around and was headed back to shore. The best part was no sun, so there was no issue sighting on the way back.

I approached the shore and got out of the water. I saw Lauren, Mike and Jacob cheering me on! I ran into transition and got ready to bike. I was the first one in my area which was good, but it would have been nice to have a little more space.

I started the bike, it was a little cold as the sun hadn’t really come out yet. I headed out and started to push it on the bike. I was doing good passing lots of people. As a matter of fact I only got passed 3 times on the bike. One guy wasn’t even in the race. He was sprinting downhill, which was stupid. I over took him on the climb. Then two guys from the older age group passed me. I did end up passing one again.

Overall the bike went well. Mostly uneventful and I was making good time. Thirty or so second slower than last year, which is interesting, but at least it was a solid effort. 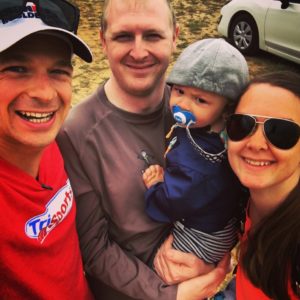 As I headed back into transition to start the run I saw Lauren and all waiting by my bike. I told them I would see them in about an hour. And I was off on the run. I was feeling pretty good and just went for it.

I quickly realized that I had forgot to turn my heart rate alert off and my watch kept beeping. It was annoying but I would just have to deal with it. 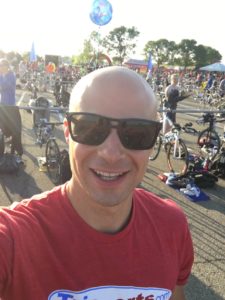 My run was good, I think possibly my fastest 10k ever. I didn’t feel it so great at the time, and I wasn’t focused on my time not really looking at my watch. I just ran. I got passed a few times and by one guy that was in my age group. That hurt, as I knew I lost a place. But I had no idea where I was. I could have been in second.

Just aways past the turn around of the sprint I stated to notice some of the Olympic distance runners coming back. It was pretty impressive. I noticed one of the guys was a pro that I saw at IRONMAN Boulder. That was pretty cool.

Just like last year there were people enjoying the paths, the guy in front of my almost tripped on a dog, who’s owner was on the phone. Wasn’t like we were in a race or anything. 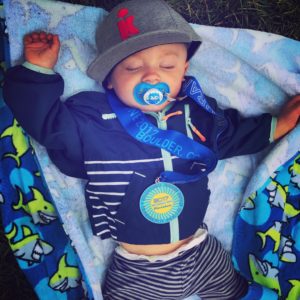 I made my way to the Olympic turn around and headed back towards the finish line. The run back felt good. Maybe a little more down hill. As I approached the finish line, I thought about where I was in the race. I really wanted to podium. Lauren and the gang were along the side cheering me on!

I crossed the finish line and got my medal and a bottle of water. They took my timing chip and I walked over to find Lauren. While it was on my mind I wasn’t in any rush to find out where I had finished. I knew I had a good race and preformed well. But that soon subsided and I went to check my results. 4th again!!! But I took 10 minutes off my time from last year. So I was happy with the improvement, but I knew I would still have a lot more work to do to get to the podium.

I was very happy overall with how I preformed. I was close on the swim, one of the top cyclists and had one of my best runs. I need to be faster though and it’s going to take the right training. Now that I’m feeling better I think I can make some major improvements.

Before we left I enjoyed a couple beers in the garden and watched the awards. Jacob passed out holding my medal. I think he was more tired than I was.