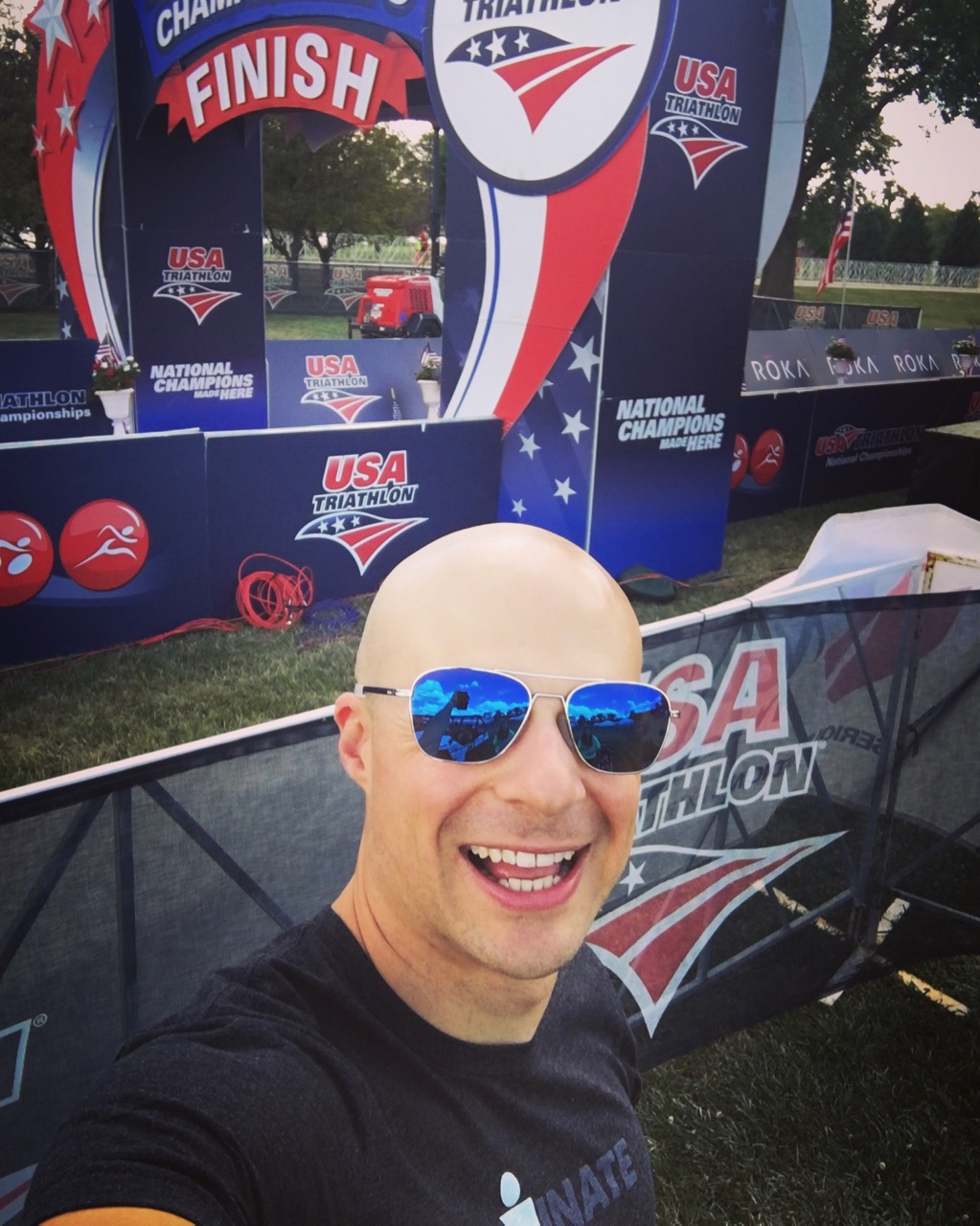 Last season I qualified twice for the USA Triathlon Olympic-Distance Age Group National Championship Race. The first was for finishing in the top 33% at the Steamboat Lake Triathlon. The second was for taking 3rd place and finishing in the top 10% at the 106° West Triathlon. It was quite an honor to receive notification that I had qualified, and not knowing if it was going to happen again I took advantage of the opportunity to participate in the race.

It took place in Omaha, Nebraska which was within driving distance from Denver. I have to say though it was a long drive, longer than I anticipated. We took off on Friday, my birthday, to drive out. We had to leave early because I had to check in and drop off my bike that day. The race was on Saturday, and I was fortunate to be in the very first wave that was scheduled to start at 7:00am.

The drive out to Nebraska was not fun at all. Not only was it long, but a tri bike with a disc wheel strapped to the top of a vehicle traveling 90 MPH though a windy state is an extremely stressful experience. I had secured the bike very well, but it was nerve racking to see it violently shaking in the wind. But we make it to Omaha just fine, with only a few bugs stuck to the frame.

We drove strait to check it so we could eat and relax after. As we found our way to the park we had to navigate through a sketch area. But the park was nice and the setup was really cool. It was a big deal and there were a ton of tents and vendors. I started to get really excited. The check in process was really simple and there was no line. The best part was I got Bib #121, a nice birthday present and 21 is my lucky number. I also got some cool swag. 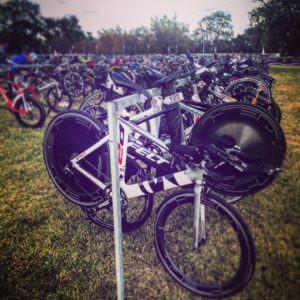 Next step was to check in my bike. All of the racks were numbered so it would be easy to find the location. I was in the first row, dead center. It was on the end of an aisle, so it was going to be super easy to find my spot during the race. Another great treat.

This was going to be a non wetsuit swim, something I’ve not done in a race. I had purchased a speed suit from ROKA last year which I had not used yet. I decided I should try it out before the race. In doing so I broke the zipper. These things are tight. I talked to ROKA and they were so cool, they told me to come by their booth at the race and they would swap it out. They did and it was great!

When I booked the trip I didn’t use one of the hotels suggested by USA Triathlon, because they were very expensive. I found a Sleep Inn that was very close to the race location for nearly a quarter of the cost. We were only about a 5 minute drive away which was perfect. Not the nicest hotel, but it would do. We checked in then headed out to Downtown Omaha for a birthday dinner.

We ended up at a seafood restaurant called The Plank. It was very good and they even had my favorite wine. Normally I wouldn’t have had a glass before a race, but it was a special occasion! After dinner I got to bed latter than I wanted to, but was able to get good sleep.

I woke up early to get myself ready for the race. I woke up Lauren and Jacob and we headed out. We were very close, but traffic was bad. I think it took us 45 minutes to in and park. We were lucky though because we ended up with a spot close to the entrance. Because of the traffic they delayed the start of the race 30 minutes. I was ready on time, but the extra time was nice. 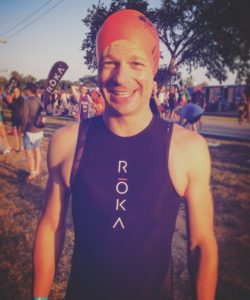 The swim start was different than any other race I had done before. We had to line up on a ramp down to a dock. Then we were ushered down the ramp and onto the dock which was moving in the water. It took some skill. Then we were given some time to warm up on the opposite side of the dock. I jumped in and the water was warm. It was nice, but the lake was dark and seemed heavy compared to other lakes that I’ve been in. Not sure what that was about.

We then had to get to the other side of the dock for the start. We needed to be in the water and touching the dock when the gun sounded. The issue was there was no room. I was snug in there with 190 other guys. Not ideal, but it was only for a minute or two before we started.

The gun when off and we started!! I was feeling good. It was packed but it wasn’t like I was swimming over people. For the first half of the swim I felt like I was doing really well. There were people near by but not crowding me, and I really felt like I was keeping up with the group. But as I came up on the turn buoy things started to feel slow. As I neared the end of the swim I started seeing caps form the second wave. This was disappointing because they had seven minute lag behind us. I knew that meant I would have been about 7 minutes behind the fastest swimmers. Not a great place.

I got out of the water and didn’t even look at my watch. I knew I needed to get going and fast. I worked my way out of my speed suit and made my way to my bike. I struggled to get socks on and was about to head off when I realized I still had the bottom of my speed suit on. I quickly took it off and grabbed my bike.

I rand to the bike mount line and I think I must have scrapped my leg across the bottle cadges behind my seat because I was bleeding. It started to hurt as I pedaled away, but I was not about to stop.

I didn’t do a very good job previewing the course. In fact I really only looked at the map. Not really a smart move, but I had limited time in Omaha before the race. The course was actually very nice, not particularly fast though. Only one really big climb and a few rollers, mostly flat though. We had a nice tail wind out to the turn around point, which ironically was in the middle of a corn field. Ideal for Nebraska. The bad news was it was a head wind all the way back.

Because it was an out and back course I would be able to see everyone that was ahead of me. I didn’t see the fist place guy until just before the turn around point. So I felt like I was gaining some time back. I knew though that I was not in a great position and that there were a ton of people ahead of me. But these guys were the best of the best so I was happy to hold my own.

There was a lot of leap frogging on the way back. I would get passed then they would slow down and I would pass them again. This was not a position that I liked, but there was not much relief on that ride back. The bike when quickly though and again I didn’t pay much attention to time.

I got back and ran to transition, spotting Lauren and Jacob on my way. It was time to run and see what my legs could do.

I got out onto the course with two other guys we were running together for about 30 seconds before I fell back. I put my head down and just did what I could do. When I hit the first mile mark I saw my split was about 7:08 or so. Faster than I expected. That gave me some motivation. The course was also pancake flat, which was really nice. 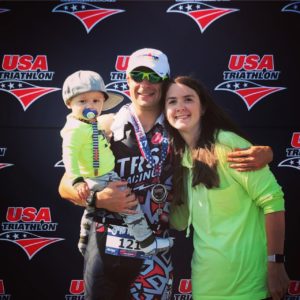 As I started racking up the miles I noticed I was staying consistent with my speed and feeling good. At one point I passed a guy a I follow and Instagram, we said hello. He was ahead of me by a bit. Then I saw another guy that I follow. I really wanted to beat him and I realized it was within reach to do so. This motivation pushed me and even though my lower leg started falling asleep I had an amazing last mile. I grabbed a cold towel that they were handing out at the aid station. Tucked it in behind my neck and just went for it. I was running at 6:55 pace, I couldn’t believe it.

It started hurting and I got into the finish chute. I was so close I could taste it! I made it through and stopped my watch. I ran the 10K in 44 minutes and change! A new PR!! I was so excited. Not only had I finished my first Age Group National Championship, but I had an amazing run. And beat my fellow Instagram brethren.

Upon checking the official results a little later I ended up in 60th place in my division. Not a great spot, but given this was the Age Group National Championship, I’ll take it, it’s still in the top 25% even if barley.

After the race we had to wait a while for other racers to finish so we could get our bike out. We ate some food and relaxed, but it was starting to get hot. I’m glad I got to go in the first wave, other than having to wait longer at the end. Finally we were able to get our bikes and that concluded my Age Group National Championship experience. It was amazing and I’m so happy I did it. A long drive but a great accomplishment.