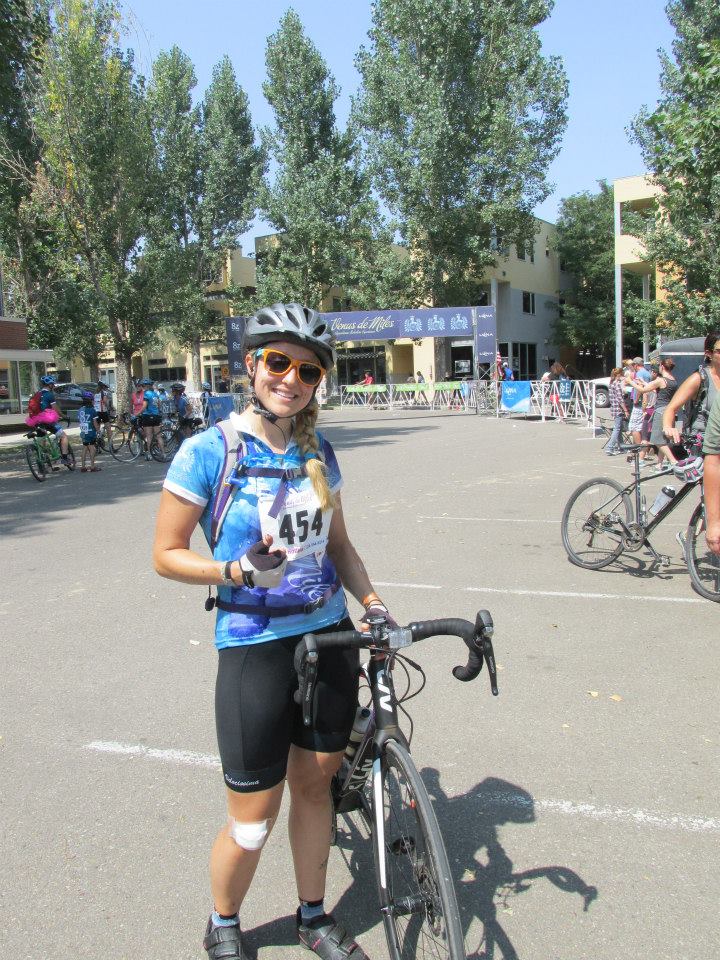 Venus de Miles (the organized women’s bike ride through Longmont, Colorado) is named after the Greek sculpture, Venus de Milo, or Aphrodite de Milo. It’s a play on words but I can easily connect the two.

Venus (and Aphrodite) is the goddess of love and beauty. The sculpture was found on the island of Milos located in the Agean sea. She was found in a pile of rubble and word on the street is that they were never able to find the arms, leading researchers to believe that maybe she was never meant to have any.

This idea of a world renown, armless statue shows us that you can be imperfect yet still be filled with love and beauty. I struggle with accepting imperfection. I hate making mistakes. I hate feeling like a failure.. I hate when I get hurt. I don’t like the scars I have from the falls I’ve taken. All this makes me feel less beautiful and unworthy of love.

It’s cycling that keeps me from falling into a pit of self-hatred. It’s knowing that I can ride 100 miles because my body is strong, like the marbleized Venus, who stood over me at the Louvre at 6 feet 8 inches.

It’s realizing that like the Venus, I can lose limbs or even patches of skin, and still ride my bike another 85 miles. Because it happened to me last year at Venus.

I was flying with the lead pacer group, my jersey flapping against my sides, slicing through the wind like Wonder Woman. We were coming up the first break and with fresh legs, I planned to continue on the ride. The girl directly in front of me had a different motive.

The direction of her body and bike signaled she was pulling off to the right to stop at the aid station. I was arm’s length away. She turned her chin to the left and looked directly at me. I sped up to pass.

And like a crumbling statue, my bike and I slammed against the ground together; pieces of us strewn along the gravel road, while cyclists clipped clopped their way around the debris.

I still had all my limbs and my bike was okay. I gently lifted its poor frame and walked it to the aid station. The amazing thing about Venus de Miles, that, like the statue, it’s well-supported. Medics and volunteers rushed to my aid; Testing my bike, checking its components, and giving it a good once over. Examining my helmet, cleaning my scrapes, cuts, and gashes. I felt the sting of the solution in my toes and they curled in my clip shoes as the medic applied it to my raw skin.

I called my mother to tell her I was going to be late crossing the finish line. I told her not to worry, it was just a “flesh wound,” and that she could expect me around 3.

The further along the route we rode, the harder it became to use my left arm. The Advil had worn off and the full ache consumed my shoulder and reached to the tips of my fingers.

By mile 85, my left arm dangled by my side. I let it rest as my right arm and legs guided the way. I may not have loved myself at that moment; convinced it was my fault I fell and my body’s fault for being so ripped up, but I loved the beauty that surrounded me. The endless horizon and amazing people who offered me help. I loved knowing I’d cross the finish line with my body still in tact and my family cheering me on.

Maybe we aren’t happy with our appearance or current abilities, but we can rejoice in the fact that cycling exists and through cycling we are offered love and beauty.

'Venus de Miles Taught Me Love and Beauty' has no comments