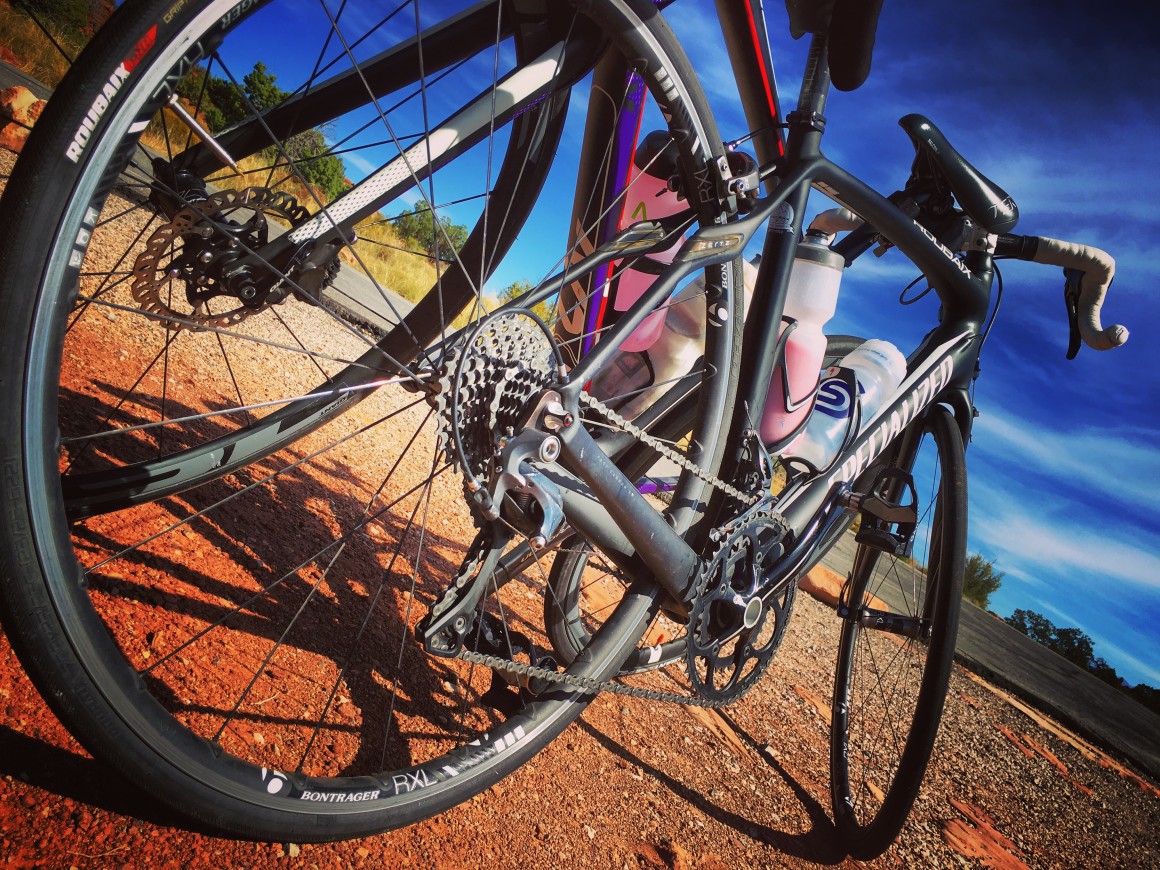 Finding new and exciting places to ride is almost never a challenge. It’s a big world and there are no shortage of roads to explore. Jessica and I had talked about checking out Moab, Utah. It’s mostly known as a destination for mountain biking, but we heard there was good road cycling as well.

Jessica and I decided to do our own Self-Supported Moab Century. Since we had never biked Moab before, we figured it would be a good idea to pick an establish route, and what better than the official Moab Century. Not only did the course take you out to Dead Horse Point, but also along the Colorado River basin.

The drive out to Moab took about 5 hours from Denver. We left Friday afternoon, right after work. We were lucky and didn’t hit any traffic. We made it as far as Glenwood Springs before we had to fuel up (food and the car). Well apparently Glenwood Springs is hopping on Friday nights, and we actually had a hard time finding a place. But eventually we got a seat at the Glenwood Canyon Brewery. Poor Jessica got a little salad, and I had a huge slab of prime rib. 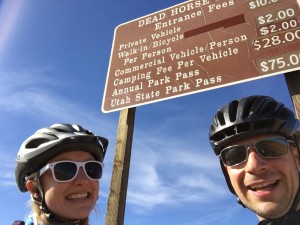 After dinner it was dark so the rest of our drive was without any scenery. Past Grand Junction there is about a 6o mile stretch with no services. I didn’t think twice about it as it appeared that we had plenty of gas. But driving 90 with two bikes on the top of the car drained the tank. First the car wasn’t able to keep speed, and then the low fuel light came on. I started to get a little nervous. Just then I saw a sign for a gas station. We made it just those 60 miles.

Past the gas station, just a little ways, was the turn off for Moab. It was nearly 11pm at this time and I was surprised by how busy this road was. It was dark and we couldn’t see anything. We were guessing what the view was, but we really couldn’t tell. Finally we arrived in Moab at our lovely home away from home, the Motel 6.

Since we had the entire day to ride 100 miles there was no rush getting started which was nice. We got rolling abut 9am. Moab was very bike friendly and there was a great bike path right in front of the Hotel. The first several miles of the ride were on this path. Other than a few areas that had deep sand from washouts the path was great. Eventually we had to turn off the path onto the road to get to Dead Horse Point. The road was chip and seal, possibly the worse road type for a cyclist. So rough and uncomfortable to ride on.

It was pretty much just a climb as we approached the park. Essentially we were climbing to the top of a mesa that over looked the Colorado River basin. Finally we reached the top and had a left hand turn to make. I kind of assumed this is where the entrance to the park would be. It wasn’t. We had a ways to go still. Along the way there was absolutely nothing to see but a few bushes. 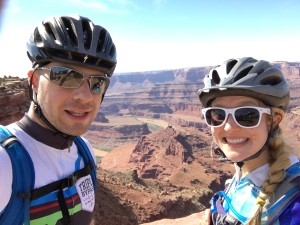 Finally we got to the entrance and had to each pay $2 for entering on a bike. The start of the park was decollate, then we say a turn off that overlooked Dead Horse Point. The view was amazing! Really impressive. We thought there was a lot more to the park, but we quickly realized we had pretty much reached the end. I guess that’s why it was only $2. 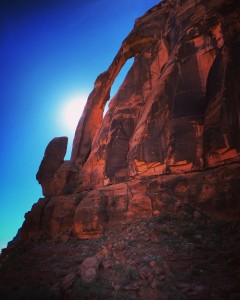 To finish the Century we had to back track to Moab, and then we’d continue along the Colorado River. The good news was that it was mostly downhill the entire way back to Moab. The badness was the chip and seal road was rough.

As we got back towards Moab, we needed to take a right onto another road. I thought it would be easy, but it was actually a bit more of a challenge than I thought. We were on the bike path and had to cross the main road into Moab. Once we crossed it was a flat ride along the river.

I wasn’t expecting much for this portion of the ride. Mostly because there were no state parks along this route. But I have to say this was portion of the ride was breathtaking. It was basically inside of a canyon, with steep walls. There were indian paintings, and people climbing the canyon walls. We road all the way to Potash, which we thought was going to be a town. It was actually a mine. We took a small break there and then continued back to Moab.

'Self-Supported Moab Century' have no comments