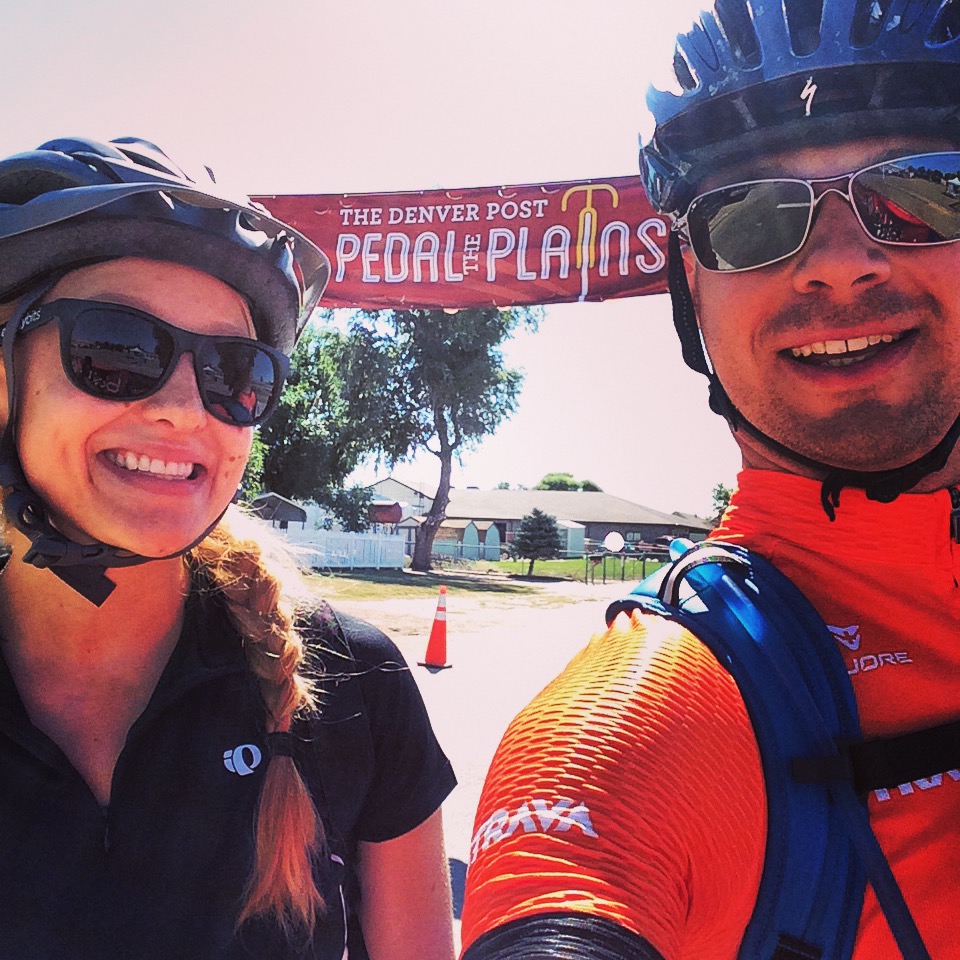 I wasn’t expecting what happened today. I didn’t really know what to expect, actually. I could only use my suitcase to pack my sleeping bag, pillow, towel, and the few clothes I had. I told Jared I felt weird carrying a huge suitcase. I figured someone would think I was high maintenance. Jared told me to look around at everyone else with their bags. Still, no one had a suitcase. As we walked toward the truck, a sheriff said, “Did you pack your bike in there.” I knew someone would say something! I blame my 1980s sleeping bag that took up 95% of the room. 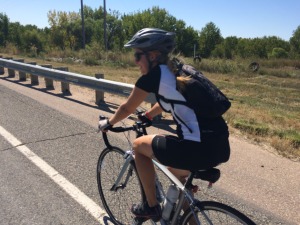 The biggest difference from the other organized rides in which I have participated is the educational stops and the fact signs we passed as we cycled along. I narrated for Jared, but we were cycling a little too fast to read entire signs. I also kept looking for the beets along the road. I only saw cornstalks. Fields upon fields. Some cows too. I noticed by not listening to my music I heard weird noises my bike made as I cycled. I thought my tire was flat, but it was gravel hitting my tire weird. The things you notice when you’re not “in tune.”

Today’s 30 mile ride was easy peasy as we use miles like this for “easy days.” Still, from the heat I was all nice and sweaty when we arrived at the school. I was also curious how they would check in our bikes. Two lovely young adults checked our wrists and bikes for our numbers. At least I know my bike is secure.

We arrived just in time for the luggage trucks and as we approached, I saw my giant suitcase. It made it! We found a nice green spot in the grass and pitched our tent. Unfortunately, not everything went so smoothly. Ice cold water showered down on us ladies in the shower truck. I stood to the side of the shower head and threw handfuls of water over me instead. Quite the adventure.

Also, lunch was not very veggie-friendly (I’m a vegetarian). We walked to the cafeteria, hoping to indulge a bit and all I could really eat were cupcakes. Trust me, I do be lovin’ the cupcakes, but I needed something a wee bit more substantial. We headed into town to see if we could find other options. When we got to the entertainment area, we scouted for veggie-friendly foods and we saw BBQ and funnel cakes. We headed to the pub.

Then we hung out at the beer garden and had some Odell brews. It was hard to focus on what Jared was saying because I spotted someone particularly attractive, at least from afar and wearing sunglasses. I was able to meet some of the other Plain Peddlers: Megan and Larry, which was cool to be able to put a face to a blog.

We are now in the cafeteria again, Jared’s pacing around while I type this, and The Limelights are playing in the auditorium. A nice, old man came to talk to us during intermission curious as to why two youngins’ would be sitting next to a wall not interacting with anyone and as he said, “all plugged in.” I told him I was writing a blog for Pedal The Plains, as I’m sure he noticed all the tents outside. He started to tell us the story of the time he painted his bike red, white, and blue and wore a construction hat. Intermission was over, all the cake was eaten, and now it’s time for bed.

'Pitching a Tent' have no comments