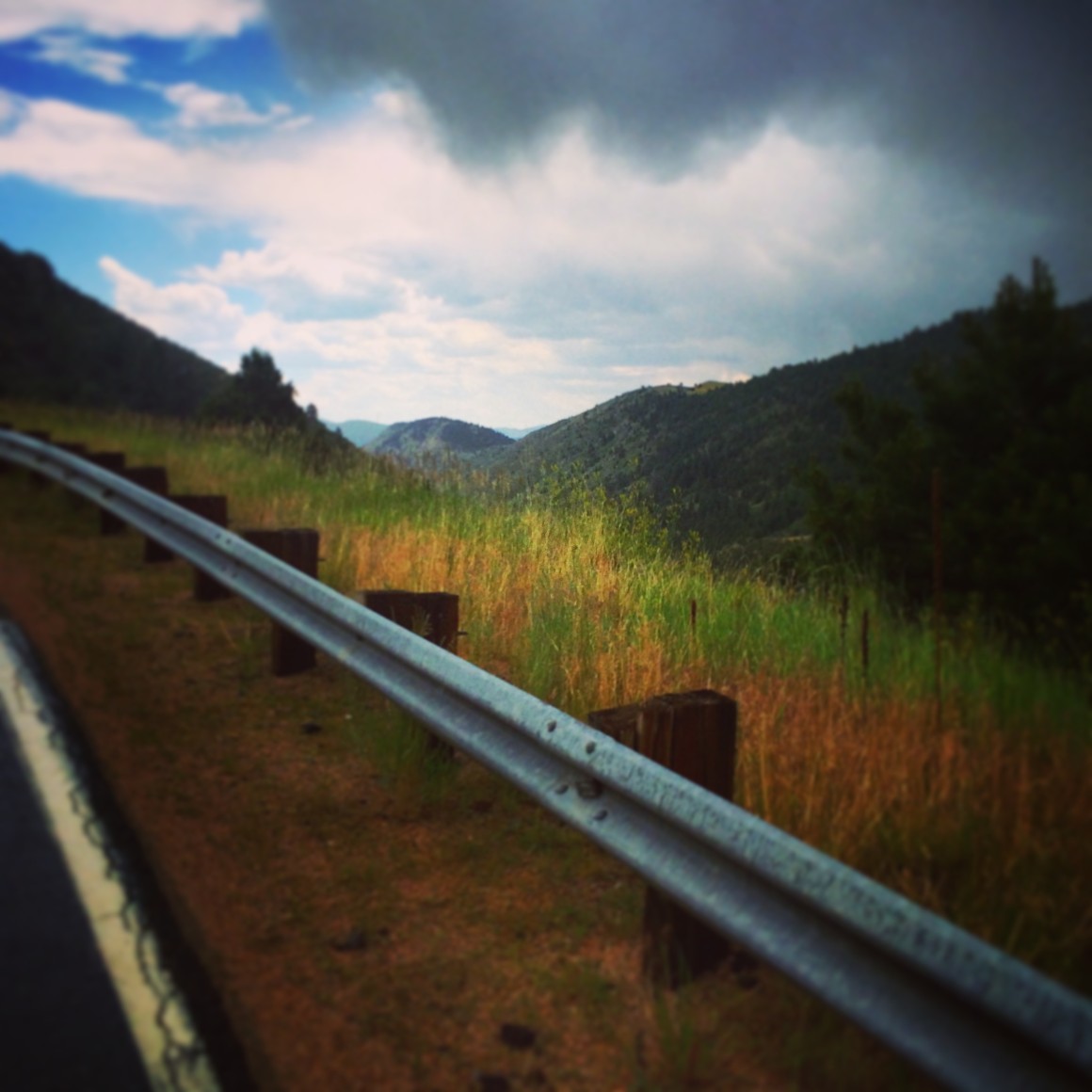 Because of the three day weekend, Jared and I were able to tackle a couple proper rides.

We chose to ride 70 miles on Friday. Our last experience riding the Clear Creek Trail to the Platte River. We were caught in the rain and thunder and lightning and hail. Twice. The first time, we at least had a canopy/shelter thing, so we just chit chatted waiting for the storm to pass. The second time, we were on the Platte, with no shelter, but the scrawny trees next to the path. The trees didn’t protect us from the hail and rain.

We needed a “corrective experience” as my therapist once told me. Friday, we chose that path. Somehow, we avoided/dodged crowds and clouds and rain. We stayed dry the whole ride, minus the sweat. I felt great afterward, like riding 70 miles was nothing. I didn’t have any flats, neither did Jared. The ride was pretty damn smooth.

And because it went so effortlessly, I don’t have much to report on that ride, but the weekend before (June 29), we had another “corrective experience” with Loveland Pass. 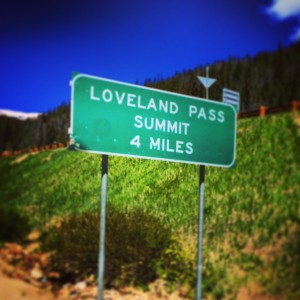 We started in Idaho Springs, just like the weekend before. This time, it was a bluebird day: no clouds in the sky, a solid temperature, no wind. Perfect conditions for a difficult ride.

Normally, while we ride, cyclists end up passing us. That’s fine, I have nothing to prove. I’m no hero. I’m on my own track, right? This time was different. We were passing everyone we came across on the trail. I really enjoyed this ride. Maybe my favorite, especially because for quite a bit of it, I didn’t have to worry about any cars. And cars didn’t have to worry about us. Win-win. After miles upon miles of uphill, we reached the base of Loveland. Jared asked if I wanted to try to cycle to the summit.

So we did. This was a lot sketchier than the trail in the woods before. There was a tiny shoulder and blind turns. The wind was whirling around, playing with my balance. Cars not keeping their 3-foot distance. The edge below my feet. One spill and I may be barreling down the side of the mountain. My legs were starting to feel it at about three miles. And while one mile left may not seem like a lot, when you’re biking uphill, it feels like you may never reach the top. Luckily, I did. 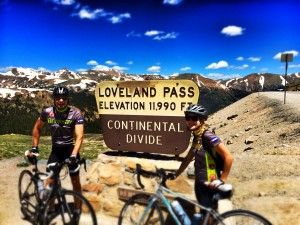 Since the rest of the trip was downhill, we didn’t bother taking too long of a break. Long enough to drink some water, take a picture, and clip back in. While cycling down the Pass, I was coming up to a turn and had quite a bit of speed. A little too much speed, if you ask me, because while I was turning, the wind feathered my bike and it damn near tipped. The remainder of the Pass, I took to the brakes pretty frequently.

I digress.. so last Sunday.. speaking about tough rides..

Completely opposite of Friday. We cycled up through Golden Gate Canyon. I mean, at this point, I have cycled up Lookout Mountain, Deer Creek Canyon, and Loveland Pass. Surely, this wouldn’t be bad. Bollocks. This was a tough ride. A lot of different factors weighing against us:

1. It was pissing rain on much of the ride.

2. It was uphill the majority of the way.

3. The wind made the ride that much harder.

4. Even when we got to ride downhill, the roads and my brakes were wet, so I had to keep pumping the brakes to keep ’em dry.

5. There wasn’t a shoulder, so we just cycled alongside the frustrated drivers.

The whole ride was mentally and physically exhausting. You can’t just have a strong body to accomplish things – your mind is the driver. There was a hill (one of many) that almost took me down. I had to stand up on my bike to pedal. My legs were on fire. It felt like my hips were lifting two chunks of lead, but I made it to the top. Then I took a break. (I’m not trying to be a hero – remember?) I would have loved to sit down, right there, on the pavement with the dirt and grass, but I knew I wouldn’t want to get back up. 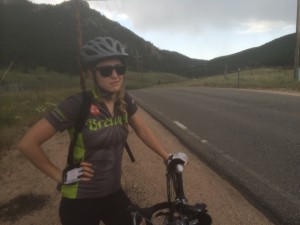 We tried to take a break at this picnic/lake place, but it was raining and windy and we were freezing standing under a scrawny tree, providing us no protection. I devoured my Quest bar and we hit the road. Our ride was only halfway completed. We still had to go back.

Talk about uphill both ways .When we finally hit the stretch of downhill, I couldn’t even enjoy it, what, with all the cars, the wet road, wet brakes, and tried fucking legs.

As I braked downhill, I heard the dreaded “whoooorsh” sound. Since it has become a ritual of changing my back tire, I assumed that was the culprit. I cocked my neck to see my back tire and it wasn’t squishy. I couldn’t figure it out, but the “whooorshing” grew louder. I finally peered at my front tire and there it was: the squishy tire. I realized I didn’t have a new tube, only an old one, from a different ride, from a different flat. On the other hand, I had two CO2 cartridges.

I pulled to the side and flipped my bike upside down, trying my damndest not to toss it into the grass in a fit of frustration. I’ve become quite the pro changing a tire since this tends to happen every GD ride. I took out the flat tube and felt inside my tire (learned my lesson from my back tire; a piece of glass constantly rubbing a tube is bound to cause consistent flats). I finally found the rock that ripped my tube. Sons of bitches, right? We decided it’s time for better tires, not the manufacturers. Bring on the bill, amiright? I just won’t eat for a week or two.

I changed the tire and we were back on the road. I was sweaty balls the whole way down the canyon though, constantly looking at the front tire for any squishiness. We arrived in the neighborhood of Golden and I yelled to Jared that it was getting flat again. He said I was fine. No, I wasn’t.

I tried to make a turn and my wheel swerved this way and that. I immediately pulled over again and DIDN’T throw my bike. I didn’t really know what to do. My patch kit was soaking wet and Jared forgot his entire saddle bag. We were only three miles from the car. The executive decision was to use my last CO2 cartridge and attempt to make it back to the car before the tire went squishy again.

We filled the tube…again..and saddled back up. I think I stared down at the tire more than the road. We only had hills the way back. At this point, I was over the ride. I was frustrated, drained (mentally and physically), and covered in dirt. I just wanted a shower. I pedaled and looked down, pedaled some more, looked down again, pedal, look, pedal, look. I continued that until we finally made it back to the cars.

Thankfully, I didn’t have to have the momski pick my sorry ass up. My bike sucked it up and brought me back to my car. I always learn things on my bike rides. This one was a no-brainer: be prepared and be prepared.

What Did You Learn? We were lucky we had at least some stuff, but really, we weren’t prepared. We never really are. I guess we’re just wishful thinkers, but in actuality, we can’t rely on good luck to get us to and fro. If I didn’t have the shitty remainder tube or CO2 cartridges, I would have had to have my mother pick me up. And what if she wasn’t available? Hitchhike? What the hell is that. It’s stupid. That’s what it is. We should always be prepared, even when we don’t think we’ll need something. We should be over-prepared.

'What Did You Learn' have no comments