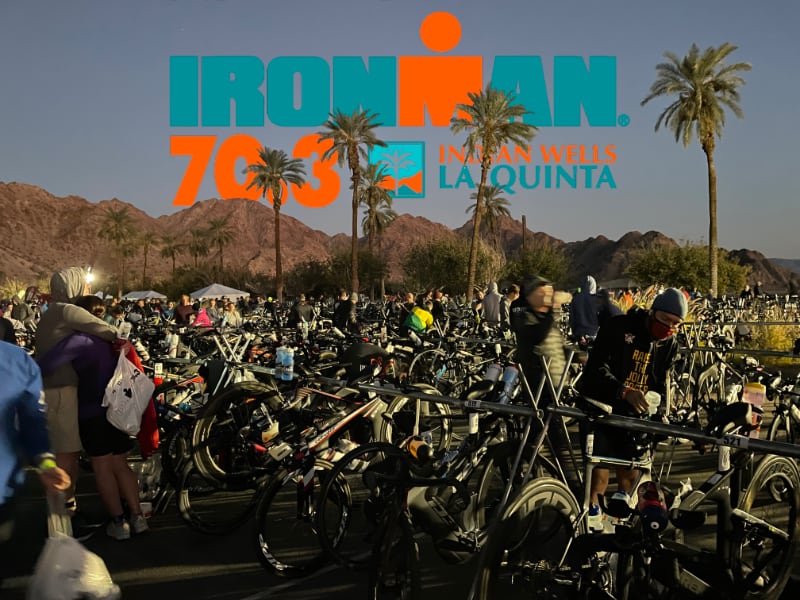 2021 was an amazing season. I saw some things in myself that I didn’t expect. I worked hard and I got great results. But I wanted more. Especially after qualifying for the 70.3 World Championship at Boulder. Not taking the spot weighted heavy on me. But it wasn’t the right timing. Enter IRONMAN 70.3 Indian Wells. To be honest I was actually considering 70.3 Florida first, but after that sold out Indian Wells it was. It was also quite affordable to get there, which helped.

The plan was to have a great late season race and qualify for the 2022 IRONMAN 70.3 World Championship.

Training going into the Indian Wells block started off well. I was coming off running the Colfax Marathon and I felt that I had a strong run that I could bring with me. Unfortunately, life got in the way. Training didn’t go to plan exactly as I would have liked. I got done what I could, but this race quickly became an afterthought and my original goals seemed like they might have to wait.

Lauren and I flew into Orange County and rented a car to drive out to the Palm Springs/Indian Wells area. It was about a 2 hour drive. I hadn’t been in Orange County in nearly 10 years, which was crazy to think about. Much of the area looked just like I remembered it. Our rental was a Mitsubishi Mirage, which had to be the smallest car ever. Although much like the cars I drove when I was living in Europe.

We got into Indian Wells in the dark, so we really didn’t have much perspective on what it looked like, but the next morning we were able to seat all and wow, it is beautiful out there.

When we booked the hotel I knew it was close to the Indian Wells Tennis Gardens where all of the IRONMAN events were going on. This venue was really great. Large and accessible with plenty of parking. We had to come and go several times over the weekend so it was very easy to get in and out.

Something kind of interesting is that the venue required everyone to be fully vaccinated. We got a wrist band that signified this. While COVID is the last thing I’m really concerned about at an event like this, mostly because people here tend to be healthy, it was nice knowing we were extra safe.

IRONMAN 70.3 Indian Wells is a two transition race. I have to admit I rather enjoy this style of race, but it does make the logistics a little more difficult. I had transported my bike via Tri Bike Transport. While a little expensive it makes life so much easier. I was able to pick up my bike right next to T2. This is where my bike would end up on race day, but we had to transport it out to the lake.

I thought about riding out there, it would be good to loosen up the legs, but it wasn’t a quick ride and it was on busy roads. So I decided we would try to cram the bike into out little rental car. Somehow we got it to fit! We drove out to the lake and to T1. Because of regulation at the lake we also had to decontaminate out wetsuits and leave them there overnight. The process was pretty simple.

I was very lucky and got race number 308. This put me in a very good position in transition. I was almost at the very beginning of a rack, making finding my stuff very easy.

Lauren and spend the rest of the day before the race exploring Palm Spring and then we had Mexican food for dinner.

Race morning, I decided to walk myself over to the Tennis Gardens to catch the shuttle bus to the lake. It was a little over a mile walk. Ironically half of the walk was along the run course. I would be seeing a lot of that street!

Shuttle busses aren’t the most fun thing before a race, not only do you have to get up extra early to get there, but there is so much waiting involved. We finally make it out to the lake and I began my preparation. My biggest fear about this race was the water temperature. I was not looking forward to it and the announce that the lake was around 65°!

They did open a portion of the shore for us to go in and acclimate. We were not allowed to warm up, but could get wet so the cold wasn’t as much of a shock to the system. I got it, and it didn’t feel as bad as I thought, but I didn’t spend to much time in there.

It was rolling start so I put myself imposition at about 37 minutes. This is about what I normally do so. It seems to take a long while before we started moving, but eventually I got to the water and I was off.

“Holy SHIT!!! That’s Cold!” I gasped as my face hit the water. It felt as though I had just plunged my head into a bucket of ice water. I told myself that I would warm up eventually. And I did, well a little bit.

This swim was an interesting one. I had a great position and rarely ran into anyone. Sitting was good other than one section that looked into the sun. My goggles didn’t fog which was great so visibility was excellent. But I just didn’t have speed in that cold water. It’s funny because I had been swimming faster in the pool than I ever have and I hoped it would translate into a faster swim which it did not.

As I wrapped up the swim I headed out of the water and grabbed my bag. I was cold and took my time to gather myself before running to the bike. I knew it would b a slow transition but at that moment I didn’t care. I ran to my bike and headed out onto the road.

The bike course was pretty cool. We were in the middle of know where for the most part, just the desert of California, but there where palm trees everywhere. It was really a pretty course.

Just as advertised the bike course was pancake flat. This is good and bad. The good I had a good consistent speed, but it also meant there were no hills to rest on. I was very happy with my pace and never got stuck in groups like I did in Boulder. But about halfway though we changed directions and there was wind! It was a surprise. It seems so still out there until we were head on in it. While this wasn’t a super strong wind it added to the difficulty of the course.

One cool section of the bike course is on a private race track. They guided us into the track and we got to ride around every which way on very very smooth pavement. It was a ton of fun and unexpected. I had see the strange section on the course discretion but didn’t realize what it was. I was thinking it was going to be a neighborhood.

As we got closer to the 56 mile mark I was feeling strong and started passing many who had passed me before. This is were I seem to do well, having the extra power at the end of the bike. But I thought how would it affect my run? In Boulder I got the penalty so I had five minutes to rest.

I headed into T2 and had a very speedy transition. As I ran out I took one of my UCAN gels and got ready for the 13 miles ahead of me. I felt okay, but I knew that I wan’t running fast. And along the way I felt something in my sock. I actually stopped to fix it. I thought the 30 seconds would be worth it in the end.

I knew much of the course was along a golf course, but I didn’t expect it to be as hilly as it was. As soon and we started on the golf course section I knew I wan’t going to have a great run split.

I was positioned in an interesting place I was seeing much of the end of the men’s pro field on the last section of the course and many of the pro women were running right ahead. I thought maybe I could hold that pace, but they slowly faded away. I guess that’s why they are pros.

Right before the gold course I saw Jim, who had helped me with swim coaching on Tower 26. We had a quick chat before I passed him. I was feeling good about myself for about a mile when be passed me.

So the surface this run course was not fun. The golf cart path was like chip seal and there was a lot of grass and sand. Not to mention the crazy hills. I struggled to keep my pace and I didn’t dare look at my watch.

As I started the second loop I was feeling good, but not great. The speed I had was the best I could do on the day. The heat was creeping in and having an impact as well. But somehow I got through the second loop and I knew I was close to the finish. I had no idea what my time was, but I was hopeful I would break 5 hours.

I ran down the finish chute and saw Lauren on the side. I ran up to her planning to give her a kiss, but she had the phone out recording me. I rand in and finished. I was happy to be done. The season was over and I was ready for it to be done.

I didn’t give up tough and I made Lauren stay for the awards ceremony. It was long but I met a great guy from Canada. He had taken first in his age group.

When the roll down for the World Championship slots started I was feeling hopeful, but not confident. My age group was huge and had the most slots. Also there were not that many people there so I thought I might have a chance. And somehow I got a slot!!! At there was even an extra slot beyond me!

I stood there in line signing up for the 2022 IRONMAN 70.3 World Championship. I couldn’t believe it. I got my goal and I was going to worlds.