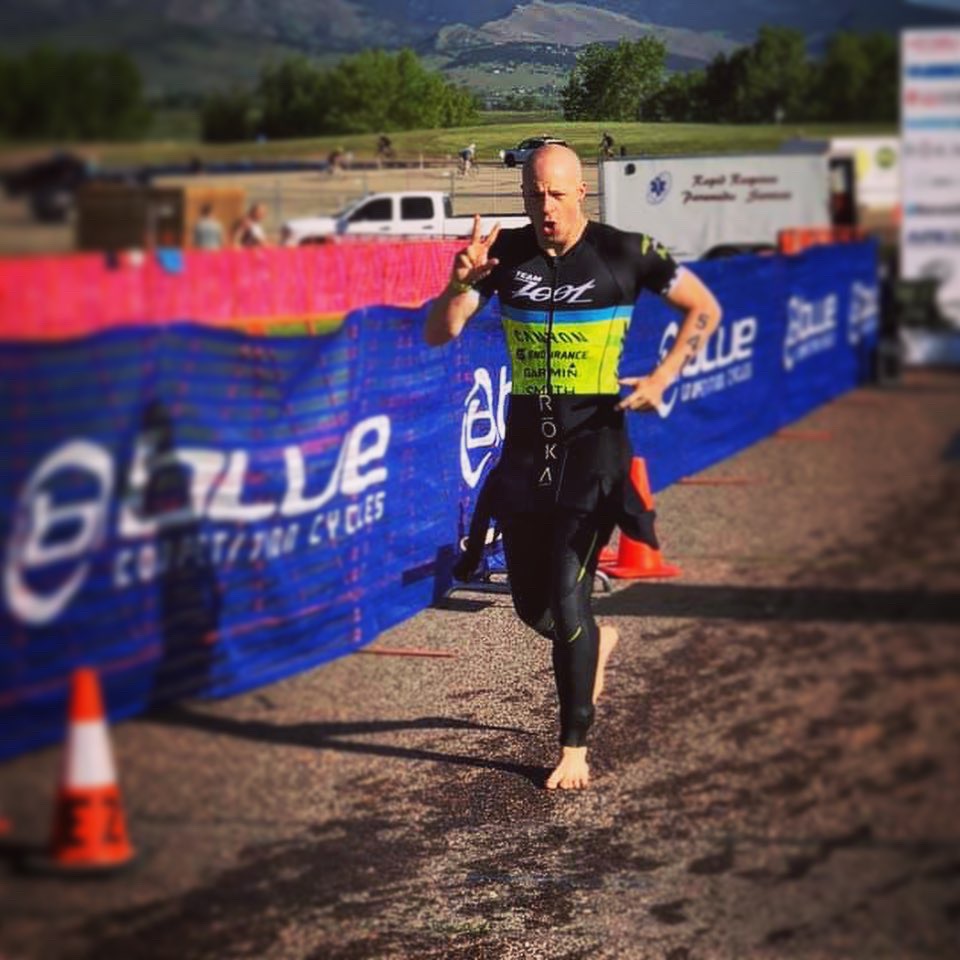 This was my second year racing the Colorado Triathlon sprint distance race, but it’s been a couple years since I’ve done this race. Other than run by a different company, it’s about the same as all the other Boulder Reservoir races.

Despite having a good performance, I did not have the race I wanted. I’ve never been great at sprints, as I have more of a diesel engine than flat out speed.

I’m happy with the swim, I fell flat on the bike, and the run was pretty good. That’s pretty much how it went, but I’ll elaborate.

Now that I live in Parker the trek up to Boulder is considerably longer. It’s a good hour drive which means having to get up and leave earlier for races. For this race I had to be out the door by 5:30am. Not so bad but I could have used the extra sleep.

I got to Transition with plenty of time, but it was already full. It was hard to find a spot to rack my bike. I was able to squeeze in close to the bike out. People are rather rude when it comes to transition. There is plenty of space for everyone, but they tend to hog it all.

I got ready for the race and did a little warm up jog. I was concerned about the temperature, but the sun had come out and it felt good out there. I got my wetsuit on and headed down to the water for a warm up swim.

The water was cold. Not as bad as I thought it was going to be, but it took your breath away! I was able to get in a quick warm up lap before the Olympic distance race started.

I was in wave 6, the first of the sprint distance waves to go. I had to wait a little while on the beach, which was a great way to get into the race mind set. Finally it was go time.

The swim started off well. I positioned myself towards the front of the group and went for it. I was pushing pretty hard and had to pull back a bit to catch my breath. I got into a good grove as was sighting and swimming well.

It was a little bit crowed out there, but I had room for the most part. The only thing that was difficult is that my goggles were leaking a little. Before the race I noticed that the seal portion was bent. Time to get a new pair.

Like most swim it felt like I had moved to the back of the pack, but I really had no idea where I was. I had a good swim into shore and gout out and ran towards transition. I had gotten out of the water in 3rd in my age group.

Transition didn’t got very well. The long run to my bike was slowed down because of the rough ground. I also had some issues getting my wetsuit off. Then the socks didn’t go on well at all. Time was slipping away. Finally I got onto the bike and headed out on the course.

The bike started off well and I passed many people out of transition. The climb up Jay road was a bit tiring and I started to get passed. While on the bike I felt like I was doing okay until the last stretch. I kept getting passed, something I’m not used to.

As I rode back into transition my time seemed slow, I wasn’t sure what I had done in the past, but I actually was slower than previous races.

T2 went much better than T1. I got my running shoes on grabbed my bib and visor and was off to the run. As I exited transition the crowd was cheering and I got a great boost. I started off and a quick pace and was able to hang onto it for quite a while.

The announcer had said that the first few runners were about a mile out. That effectively meant I was at least 10-15 minutes behind the leaders. Not exactly where I wanted to be. I had hoped maybe I’d be lucky and there was no one faster in my age group.

Soon after I saw the leader pass, he had a big lead on everyone.

Just before the halfway point I head a guy come up on me. As he passed me he ran right into me. He apologized the proceeded to cut in front of me and then slow down. This pissed me of and I shouted out don’t cut me off! I got a burst of energy and pushed ahead of him. I could hear him behind me though.

At about mile two I couldn’t hold the pace any longer and started too slow. This guy passed me and started to push further and further ahead. I only had a mile left to go, but I was pushing as fast as I could.

As I ran the final mile of the race I thought about the slip ‘n slide and the finish line. I told myself, next time I do this race I would do it. I hadn’t thought about it much before, so I decided I was going to give it a go. And I did just that, crossed the line then jumped into the slip ‘n slide. It was fun.

I stopped my watch and looked at the time. I knew I had taken 10 minutes of the last time I raced. I was happy with that. But then I saw the results, and that I came in 5th in my age group I wasn’t very happy.

My run was good, the swim was solid, but that bike, I don’t know what happened! I really haven’t ridden outside much this year, so I think it’s something I’m going to have to focus on.

So while I improved over the last race, I’m disappointed with my performance. It is a sprint and the first race of the year, so I hope to have better luck at the longer distances that I seem to do better at.