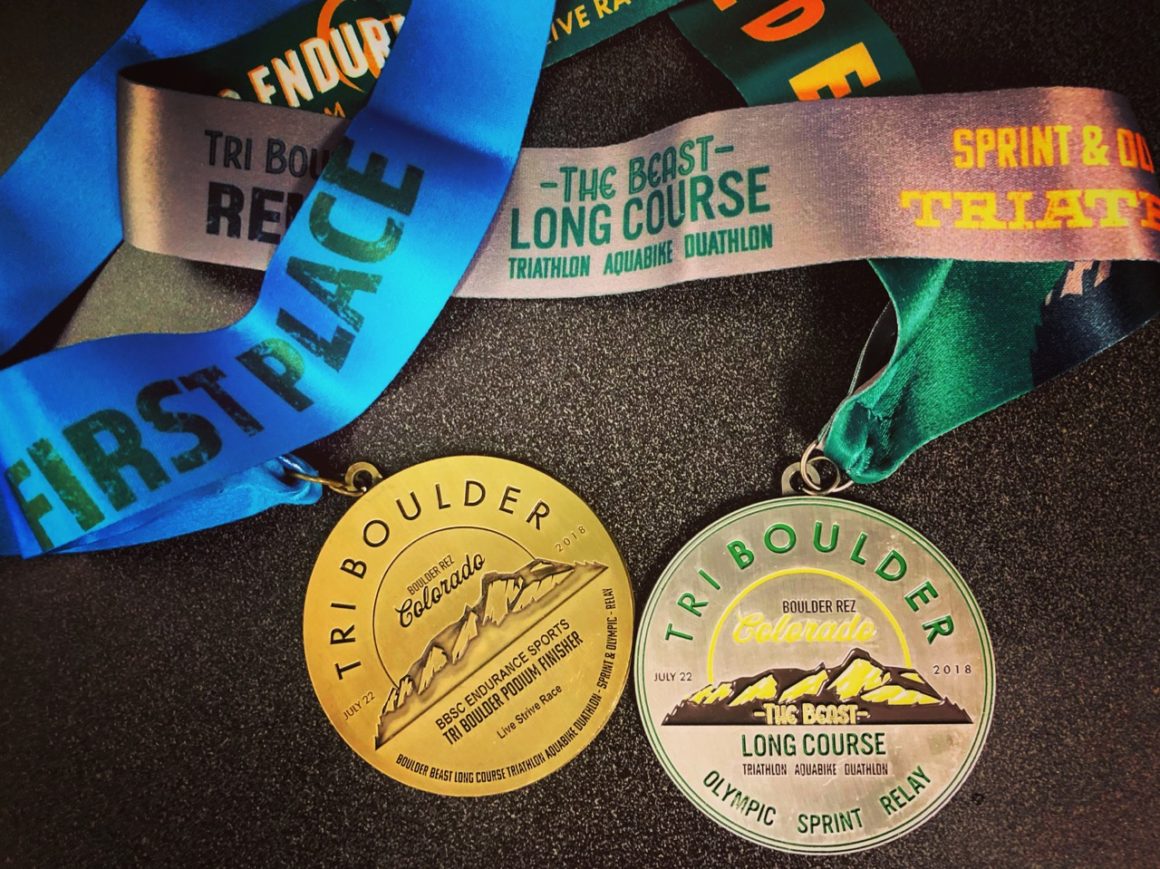 This was my second year competing in the Boulder Tri. Last year I did the Olympic distance, finishing in my standard 4th place. This year they added “The Beast” which was a long course option. It’s just shy of a Half IRONMAN distance.

I was excited when this option was made available as I like the longer distance races the best. This was also a good challenge because it’s the same course as the Olympic distance, but just two loops. So I knew the course and wouldn’t have any surprises. 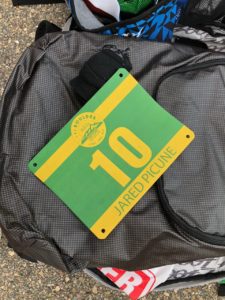 Because it was a longer distance event, I would be in the fist wave of swimmers and had to start at 7:05am. I got to the reservoir a little before six to setup. As I walked into transition, I assumed I would be on the first rack since my race number was 10. The first row was labeled 1-115. I put my bike right there as I assumed it started from one. I later found out it was the opposite. Although it really didn’t matter for this race.

After I got setup I got in a quick jog to warm up then put my wetsuit on to head down to the water. I was able to get in a good warm up swim before it was time to start the race. We lined up on the beach and the race began. I jumped into the water and started swimming. Like most of these races we had to swim the first half into the sun. Some clouds rolled in and gave us some shade, but the buoys were sill extremely hard to see. I also had a leaky goggle that was slowing me down.

The first half of the swim didn’t go great. I finally found my rhythm on the second half, but I felt slow. I was going to be a long race though.

I got out of the water and ran up to transition. I had no real idea where I was as racers from the Olympic distance had joined us at this point. The transition was not all that fast, but efficient and I got out on the bike. 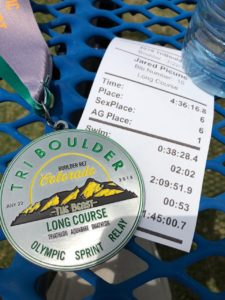 The bike went well, I was feeling good and fast. I was able to keep a good pace and only got passed by a few Olympic distance athletes. Also I was able to over take one or two on them again. One of them over took me right at the end of the first loop. I kind of laughed to myself as he was working for position and I still had another lap to go. I wasn’t about to burn matches.

The second loop of the bike course was lonely. I was pretty much alone the entire time. Towards the end of the second loop I did catch some of the slower Olympic distance athletes, but never saw anyone in the long course race. I was’t sure what that meant exactly, was I ahead, possible in first? I didn’t know.

I rolled into transition ready to do a flying dismount, when I lost my footing. Nothing too bad, but I had to stop to get off the bike. I had a very speed transition and was off on the run. The start of the run felt great. I had a good pace going. But as the run went on I started slowing.

Before I hit the fist aid station I was passed by a guy doing the long course. He was running fast and there was no way I could keep his pace. At that moment I began to think about my placing. For all I knew I could be second at that point. He ended up coming in third overall. As I ran closer to the first turn around I counted as other runners passed by. There were at least 3 in front of me. But I struggled to tell exactly where I was. 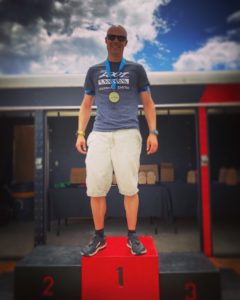 As I finished the first loop I felt good, although my pace was slowly decreasing. The sun had also come out and it was starting to warm up. I just kept going as fast as I could. As I approached the finish I could tell someone was coming up behind me. I didn’t want to be overtaken at the last moment, but I had no more gas. I gave it every thing I could to hold my position to the finish.

I crossed the finish line happy the race was over. It was a hard one! I immediately went to check the results. First in my age group and 6th overall!!! I was ecstatic. Part of me wanted to be in the top 3 overall, but I gave it everything I could and was very pleased with he results.

While my swim went okay I could have preformed better and I also learned I need to work on my run fitness. Improvement on the run is really needed to make sure I can be competitive.

This was my second 1st place in my age group. Back to back wins sure feel good and I’m very happy with how this season has been going. Of course I still want to improve.

I feel that it’s important to stick around for the awards, but I decided to take off today as I had to get moved out of the condo. I collected my award and had them take a picture of me on the podium. It’s a place I really like!.