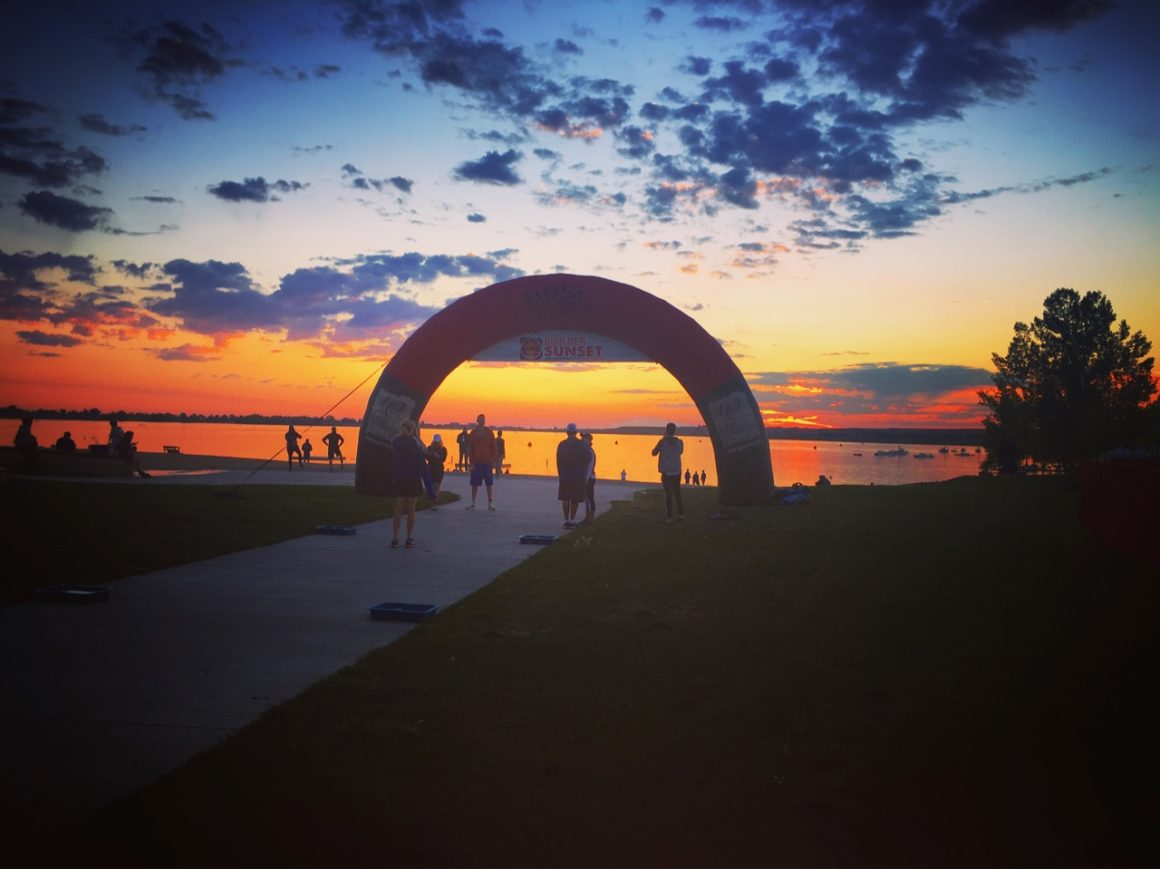 The Boulder Sunset Triathlon was the third in a series of triathlons, put on by BBSC Triathlon at the Boulder Reservoir. All three races have the same course and I had come in fourth place in the pervious two, as well as the only one I raced the year before. It was time to break the curse.

Unfortunately, I was not feeling good the morning of the race. I hadn’t gotten enough sleep and I slept through my alarm. I didn’t enough time to get ready in the morning and I had to rush to get up to Boulder. Although I was able to get moving and got up there with plenty of time.

My sister was also racing in the sprint distance, so I met up with her when I got there. The other races in the series, I was in the first wave, but it was reversed in this race. It was nice because I got to see my sister start the swim. I almost got to see her get out of the water too, but it got a little bit close to my start time.

This swim was the most violent swim I’ve ever been in! There were guys everywhere and I was getting hit left and right. In fact my watch got hit and stopped twice! That has never happened before. The other challenge with the swim is that you are going directly into the sun for the first half. In the pervious races I’ve always gotten off course. This time I managed to stay right on course.

The second half is much easier as people were spread out more and the sun is to your back. I knew I was falling to the back of the pack and I started seeing the following wave catch up with me. While this is normal it’s never a good feeling.

Getting out of the water I didn’t feel like I was in a good position at all. I ran to transition and got ready to bike. The transition went well and I did notice quite a few bikes sill left of the racks.

As soon as I got on the bike I could feel I didn’t have the energy in my legs that I’m used to. I wasn’t feeling it and I wasn’t happy about it. The bike was a grind and I wasn’t taking down people like I had hoped for. About halfway through the bike things changed for the better.

I headed East down Nelson and suddenly I was going 35 MPH with the wind at my back. I felt strong and fast and I started passing people. Finally I had my bike back!

I noticed that my time was on par with the other races on this course so I was feeling like I was back in the race.

As I headed back to transition I made the decision to do a flying dismount. I’d not done this in a race before, but had practiced in training. I was a little nervous about this, but was able to execute it well. May have not been super graceful but got it done. 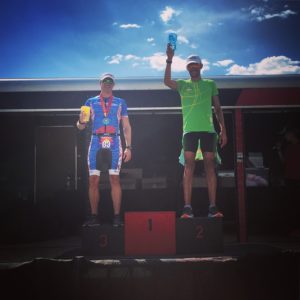 Bike to run transition went very well and it felt quick. Just like that I was on the run course. I ran at a pace that seemed slow and comfortable. I didn’t look at my watch as I didn’t want to know my speed until the first mile. The first half of the run I was neck and neck with a guy from the School of Mines. Eventually he got ahead of me and too a considerable lead. It would have been nice to keep on pace with him, but I didn’t have it in me.

The second half of the run was also a struggle. It was not easy and my pace was creeping towards the 8:00/mile pace. I really wanted to keep it in the low 7:00/mile range.

The last stretch of the run was a struggle and seemed to take forever. But I crossed the finish line and it felt great.

I didn’t know how I did, instead I went to look for my sister. When I finally found them, they told me I came in third. I was like NO WAY. But sure enough, I had broke the curse and finished in third. I also took about 3 minutes off my time from the previous races. And on top of that not feeling great.

It was amazing to stand of the podium, this was the first time that I actually got to do that. I’ve placed in two other races but never got the opportunity. It was a special moment, followed be an even more special evening. My wonderful girlfriend Lauren thew me a surprise birthday party with friends and family.