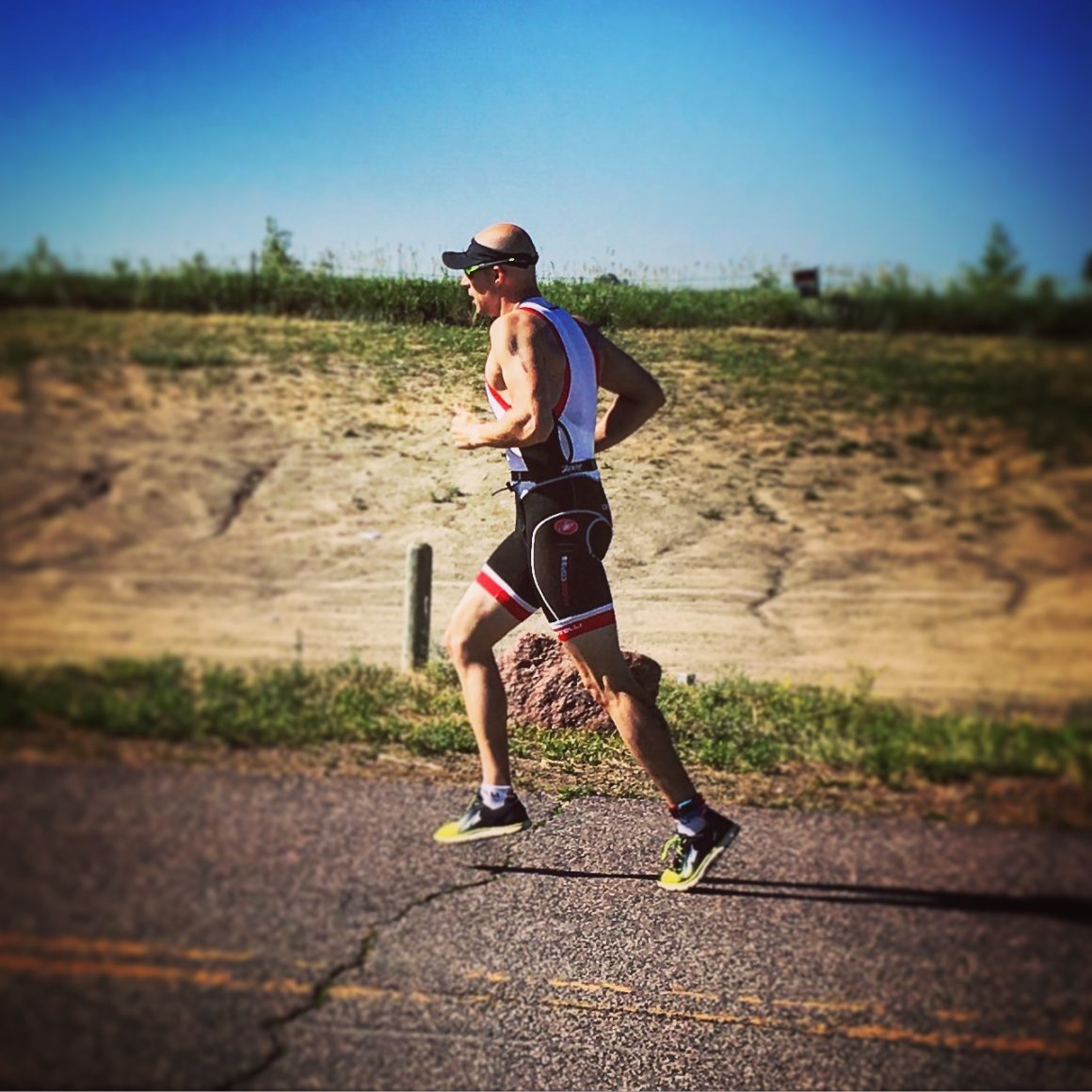 The Boulder Sunrise Triathlon was my second olympic distance triathlon. I was looking forward to this race because it was on a semi-familiar course around Boulder Reservoir. My sister and brother-in-law were also going to be there running the 10k that was happening concurrently.

Race week was busy for me. I started the week off with a great training regimen, but towards the end of the week things started going downhill a little. Between a Rockies game and a camping trip, I wasn’t able to get all the exercise and rest I wanted before the race. It wasn’t the end of the world, but I wasn’t feeling 100% like I would have liked.

I woke up early on race morning and was feeling pretty good. I got my stuff together and loaded the car. About 5:30am I hit the road to drive up to Boulder. I was listening to the Mile High Tri Podcast on the way. The host would be racing the Boulder Sunrise too, I wonder if I saw him out there. This got my pumped up and ready to race. 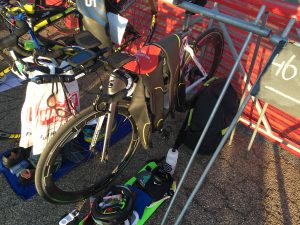 When I got to Boulder Reservoir I parked and headed towards transition. The racks were assigned by number which was nice. I was on the edge, but in the middle. Not a bad spot. I got all set up and my family showed up. I left transition and went with them to a grassy area by the Reservoir. They laid out a blanket and I got my wetsuit on. I lots track of time and realized that I was only about 5 minutes from the start. I ran down to the water to get a quick warm up swim in.

For the swim portion, we started on the beach and had to run into the water. This was the first triathlon that I had to do this. I wasn’t sure what to expect. I positioned myself in the middle and just went for it. We ran into the water and started swimming. I was off and felt good. But as I started sighting the sun was directly in front of me and I couldn’t see the buoys to save my life. I was following other swimmers, but it was making me nervous because I wasn’t sure they were going the right direction. I manage though and made it buy the first couple buoys. 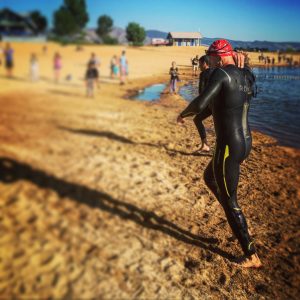 The swim course was a large rectangle and as I came to the corner where I had to change direction, I realized I was sighting the wrong buoy. I was not the only person doing this. I quickly corrected myself but noticed many others getting yelled at, telling them they had to round the other buoy. The second half of the swim wasn’t so bad. The sun was behind me and I could see. Towards the end I ran into a guy that was swimming about the same pace as me. It was a little annoying so I powered to get by him. As I got out of the water, I saw my Dad standing on the shore taking photos.

I ran to transition and was struggling to get my wetsuit off. There were plenty of bikes left in transition so I felt good about my position even though I knew my swim was slow. I couldn’t find my bike though!!! I was running up and down the row and it was no where to be found. I started freaking out, but then realized there was signs with numbers. I gathered myself and found my row. Getting the wetsuit off my ankles was a major struggle. I’m going to have to find a new way to do that. I dried my feet an put on socks. All of this was taking a long time, but I new I needed socks for the run. Finally I grabbed my bike and headed out.

The bike is where I feel most comfortable and where I knew I could pick up some time. There are some rolling hills along the course, but I seemed to be able to power through them keeping my speed steady. I was making great time, keeping my speed in the high 20’s. I was passing a lot of people and feeling good about it. Then I heard this sound behind me. A super bike with a rear disc flew by. I looked at his calf and realized he was racing the sprint. Must have been the first place guy. Other than him no one else passed me on the bike. As I approached transition I decided to do a running dismount. I’d not practiced this much, and didn’t quite get my leg over, effectively racking myself. Not so smooth.

T2 was a much smoother transition. I was able to get in an out very quickly and started the run. I took off a little bit too hard though and developed a bit of a side cramp. I made myself slow down to get into a better groove. As I was running I saw my Dad again taking pictures. Then I saw my sister running to the finish. A few minutes later I saw my brother-in-law too. I wasn’t running very fast and I knew I couldn’t push myself too much more. Much of the course was gravel and I just didn’t feel comfortable on it. I made an effort to get water from each aid station. I downed it then poured the rest on my head. That felt really good.

As I got to the turn around point on the run I encountered a family with two little girls and a dog. They completely blocked the path and I almost fell trying to get around them. The second half of the run was better. My speed didn’t pick up much but I side cramp subsided and I was consistent. I didn’t get passed much on the run, but did notice two girls who did pass me. Later on I found out the were the top two women overall.

I made a strong effort to the finish, not a sprint as I didn’t have it in me. I crossed the line and the immediately wanted my timing chip. I got my medal and a bottle of water and then joined my sister and brother-in-law. We all finished. I realized I forgot to stop my watch. I looked down and was surprised by my time. 02:45! My last olympic was 3:05 so I shaved off a good chunk of time. I went over to the truck to see how I finished and was surprised to see I was 4th in my age group. I didn’t think I had been doing that good, especially with the weaker run.

The Boulder Sunrise was a great event and I was happy I got to do it with my family. I’m glad I had a strong performance and it’s given me a lot of things to work on. My bike can always be better, but I feel that I am in a good spot with it. I need to get the speed up on my run and improve my swimming. I’ll be working on these things and see if I can improve more. I don’t have any more olympics slated for this year, but 2 more sprints and a 70.3! The olympic distance felt good, but I’m a little worried about the half. Time to up the training.