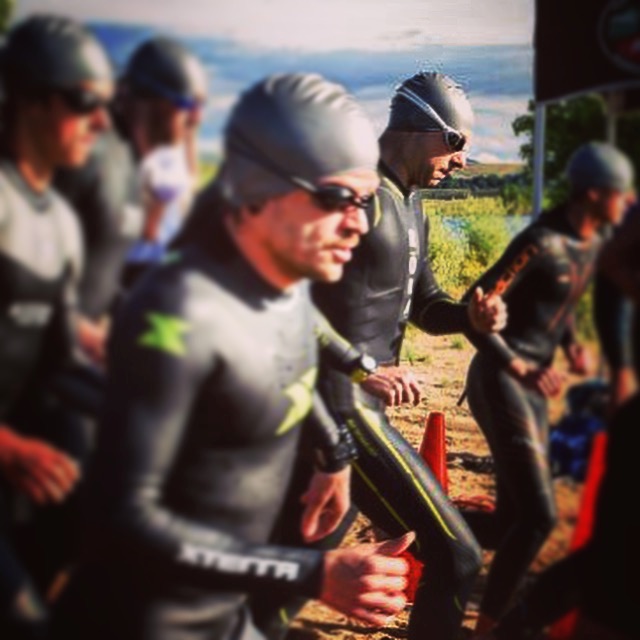 This is the third year that I’ve compete in the Boulder Sunrise Triathlon. I’m not sure what my expectations were going into this race. The past two years I had finished in 3rd place. So I really wanted to move up and podium.

In the week leading up to the race, I had let my training lag and my nutrition was horrible. Frankly I was not feeling great before this race. Life has been kind of crazy lately and I was really feeling unprepared. But I showed up and was going to do the best that I could.

I got to the Boulder Reservoir early to pick up my packet. There is a $10 free to do so at these races and I had spent the day before stressing about getting the cash. Thankfully Lauren helped me out as I never carry any cash. But it turned out I had already paid for it when I signed up. I guess I was thinking ahead. 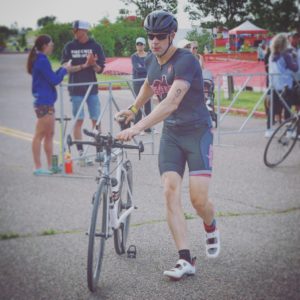 I had plenty of time as the Olympic distance race started a bit later in the morning. I got racked and my buddy Aaron showed up, he was racing too. We chatted and he went of for a run and I headed to the water to warm up for the swim. Unfortunately, when I got to the beach they closed the swim warm up. So I was stuck there having to wait for about 45 minutes. It went by fast though.

Finally it was time to start the race. We lined up on the beach and Aaron wished me good luck. And then we were off.

The first part of the swim was messy. It’s been worse, but it was crowded and really hard to sight. The first half of the swim you are going into direct sunlight which is very difficult to see the buoys. I was aware of this challenge, but it doesn’t seem to make it any easier. Once headed back to shore it’s much easier. Overall my swim was just okay. It was faster than previous years, but it didn’t feel great. As I got out of the water I saw Aaron just ahead of me.

We ran into transition to get ready for the bike. I commented to Aaron that we missed the crowd, and then we off onto the bike course. He was still just ahead of me. As we left the Reservoir, my goal was to catch up to him. I never was able to get there though.

I had a good bike, but still was not feeling the best. As I headed back to the Reservoir I decided I was going to do a flying dismount. I was a little nervous about this, but I had been practicing. It was a success and saved me a lot of time in transition.

As I headed out onto the run I wasn’t sure how far behind Aaron I was. I didn’t see him ahead, but knew I would soon find out as it’s an out an back course. So I would have to pass by him at some point. 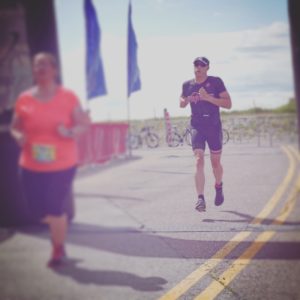 The run went pretty well. I was going as fast as I could. Not necessarily as fast as I wanted, but I was holding a strong pace. I still have a lot of work to do on the run, but it was a better performance than in past races.

A little before the halfway point I passed Arron, he was looking good. I had tried to count the position we were in but I quickly lost track. We were at the head of the pack, but I wasn’t sure of many peoples ages.

Not long after I got passed by a guy in my age group. That was difficult because I knew there was not way I could catch up to him. He was flying.

The run was extra had from me as it’s mostly on dirt, but the last section in on pavement and it was very welcome. My pace increased as I headed to the finish. I crossed the finish line feeling good about my performance. I knew that it was a tight race and I wasn’t sure exactly where I ended up.

I checked my results and I had come in 4th in my age group. Damn the guy who passed me stole 3rd place from me. That is so disappointing, but seeing his run splits there was no way I was going to catch him. So I know that I need to get faster on the run.

I met up with Aaron and asked him how he did. He was able to get 1st in our age group which was awesome. I had hoped we both could have podium, but I just missed it. 4th 3 years in a row now! Next year I’l get it.