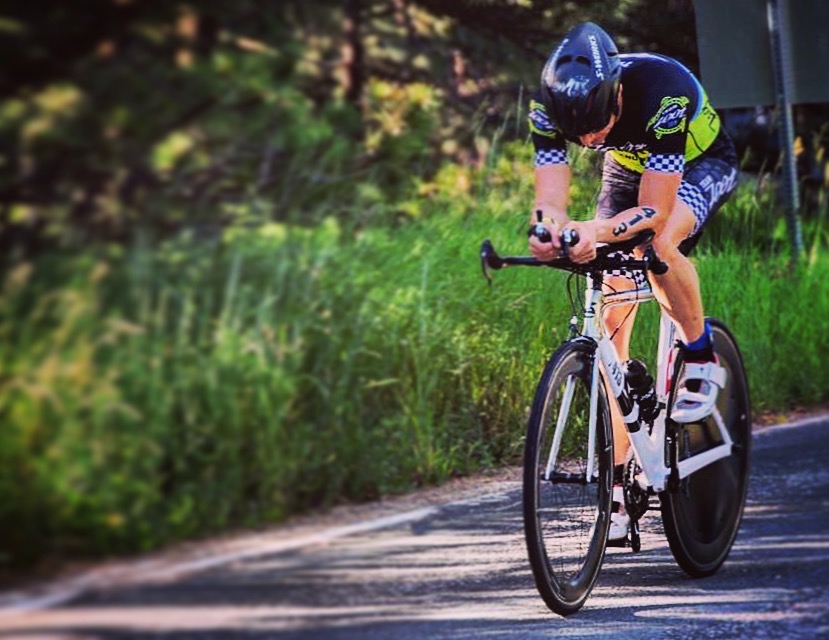 This was my first year competing the Boulder Peak Triathlon. I had been looking forward to this race since it has a slightly different course than the standard Boulder triathlons. It’s usually the same weekend as the Triple Bypass, which I’ve opted to participate in the past years.

The night before the Boulder Peak Triathlon, I had a big work gala. It was a formal affair with an open bar and tons of food. I knew from the start it was going to be a challenge, not only to make good decisions on the food, but also to get out of there at a decent time. I probably ended up eating a bit too much, but we did leave around 9pm. I would have like to be sound asleep by then for the race, but it wasn’t too bad.

I did only end up getting about four hours of sleep which was not ideal. I also had to get up around 3:30 am to give myself enough time to get out to Boulder. It was a rough morning.

I started with a run warm up. Alternating between jogging and strides. This process seem very beneficial. Next I got my wetsuit on and headed down to the water to get in the swim warm up.

On the way down I ran into Amy and Rich. Amy is member of Team Zoot and Rich is her coach and the host of the Mile High Endurance Podcast, which happens to be one of my favorite shows. It was great to meat them and we had discussed some swimming strategies.

I was able to get in my full swim warm up which was very beneficial. The water was good temperature, still wetsuit legal, but not cold at all. It was nice and clear too.

I was in the third wave to go. As we lined up in the water I ended up in the front. This is not usually the place I want to be in the swim as tend to get swam over. I decided to go for it though.

As we started the swim I went out hard, and unlike most races I found myself in a position away from other simmers. Sighting was a little hard as we were swimming right into the sun.

Not long into the swim I realized I was getting off course and sighting the wrong buoy. I quickly corrected. Other than that slight detour, I was keeping pace and having an amazing swim. I kept thinking to myself that this was the best swim I’ve had yet.

As I got out of there water there were not a ton of people around. I wan’t too sure of my position, but I felt good. I didn’t even notice the time on my watch. I ran into transition and right past my bike. It’s was not the best T1. I also had trouble getting my wetsuit off. But less than two minutes later I was out on the bike course.

The bike started off like most races out of Boulder Reservoir. I starting passing people one by one as we headed to Jay road. Instead of going strait to 36th, this course to a bit of a climb on Olde Stage Road, before heading back to 36th. This is what the Boulder Peak Triathlon is know for.

I had never done this climb before and was not sure what to expect. I paced myself and we approached the climb. I was passed by a girl racing for the CU Tri team. I was quite impressed as this usually doesn’t happen. But she quickly tired on the accent and I passed her again.

The climb was brutal, many times I thought we were to the top, but then it just kept going. Once we finally peaked, we had a short sections with a 35 MPH speed limit. This section worried me a bit as you could be disqualified it you exceeded it. I rode my breaks and made it though.

I stepped on the gas and cruised the rest of the way back to the rez. Towards the end of the course a couple of guys in my age group passed me. I wasn’t happy about this, but I also wanted to be smart about my pacing. If I could stick with them I would have a clear idea where I was in the field. Although I had no idea where the leader was, if I could stick with these guys and run them down I would at least move up.

We road into T2 together, and I had a great transition only taking 50 seconds to get out on the run. Unfortunately, the guy I was trying to stick with was even faster. But I was right behind him.

I started running focusing on pacing myself, I had the whole 10k to go and wanted to pace consistently. Not long into the run I knew I was going to be able to pass this guy and I did. Unfortunately, I got passed by another guy in my age group too.

Position wise I had not idea where I was, but I knew there were at least two other guys ahead. I was keeping on pace and feeling good though. It was getting hot out, but it didn’t seem to affect me much.

As I came up on the last mile of the run I saw a guy who I thought was in my age group. I wanted to pass him and take the extra spot. I push hard but I didn’t have much to give. As I approached him I realized he was in another age group. This was quite a relief as I could just hold pace, I didn’t have anything left to give.

As I finished the race I felt really good about what I had just done. It was an amazing swim. I felt the bike went well and the run was excellent and fast. I checked my position, and I was 8th in my age group. Not what I wanted to see. But I quickly realized how cooperative this race was and I was proud of my performance, so I was happy.

I had my fastest Olympic distance swim and run, not much I could complain about. Another nice surprise was that the series points for the Colorado Triathlon Series I singed up for went to 8th place. That means that I got 4 points for the first race and 1 for this race. I actually have a chance to win the series which would be a nice treat.

The next race in the series is a 70.3 which I tend to do well at. I’m looking forward to that challenge.